The Flying Eyes- Done so Wrong (World in Sound) 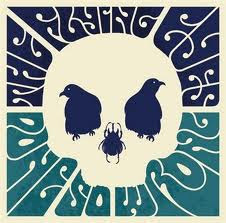 The based Flying Eyes is back with their new full length record. The album is quite blues based still but a more rock approach and a bit darker, heavier record in general, especially the title track. I just listened to the bands first CD, which combined their first two EPs. This new one has 10 tracks in 39mins. The opening track Death don’t make me Cray is a killer track with heavy riff, haunting vocals and great but short spacey, fuzzy guitar break. Poison the Well is next and pretty aggressive and the vocal has a very special effect on it to make it quite psychedelic as the band really rocks on this one but bring it down at the end with a short bluesy solo that bust out into a furry. Nowhere to Run, is a slower bluesy track with some nice guitar and a great build up but unfortunately they just end the track and never really take it further or jam it out. I get the feeling this band does not jam at all, just plays the songs as they are. Clouded is a very nice and more floating melodic song after some heavy dark psychedelic stuff. Heavy Heart was a short instrumental track. Sundrop is a happier sounding track with a cool tremolo guitar and melodic singing. Overboard is slower as well but kicks in with a more heavy section and has great dynamics and a cool echoy guitar part that is used throughout the song. The title track is next and the only track that  over 4½ mins long and also the heaviest one and only experimental track. The beginning starts off very cool with some delay guitar, spaced out effects before the monster guitar kicks in. There is no singing until nearly 5 mins into the track. Greed is a track that starts with a cool groove but then they go for a more hard attack and lose the groove but then come back to it. Great song. The CD ends with Leave it all Behind, which is an acoustic number with a female vocalist singing some vocals as well.
Overall, the band has made a very cool record and it is for sure heavier than their earlier material, which was more bluesy and this is more rocking stuff. I also really love the cover artwork on this album, very cleaver and cool. One thing I find strange is that the singer and band is compared to the Doors and I don’t get this at all. The singer sings a lot like the way Glenn Danzig does but he has his own cool way.
http://www.myspace.com/theflyingeyes http://www.worldinsound.de
Posted by Scott aka. Dr. Space at 9:23 AM