The Triumph of the 16 Deadly Improvs (Rosemont Recordings) 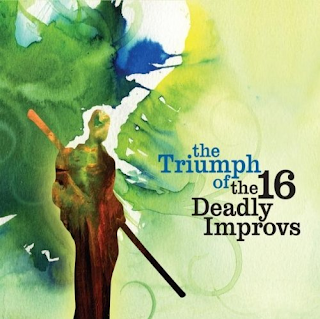 This is a based project that has produced 5 records over the last 15 years. This CD was put together from one 2½ hr session on June 28th, 2008. While it is not totally improvised, there are no bass or drum overdubs, mainly vocals, some guitar on tracks 12 and 15 and piano (track 6) and Glock on 13, otherwise it is what was recorded. They also inserted some public domain samples as well. Some of the 16 tracks are long and some short like the first track, which is under a 2mins and starts as if you are ending a concert! Spirit or Matter is next and a cool songs with some beautiful melodies and male and female singing as the track glides along and the spacey keyboards melt into the melodic guitar playing. Torpedo is mainly lead by a cool bass line and Talking Heads like rhythm guitar while a quite space lead guitar takes the lead part in this cool instrumental track. Bugbear Blues is just what is says, a short jazz blues rock track with some very melodic and very jazzy lead playing. Invincible Pole Fighters has a sort of darker thread to by one guitar and the other plays a more melodic line. It is quite a surprise when the vocal sample cuts through. Into another Time is a slow track with some special keyboards, singing and a good chance compared to the other tracks. The melodic guitar line is quite spacey and has some nice delay. It gets quite dreamy at the end. Gargantua is another one with a kind of dark theme with a keyboard that sounds like a haunting voice as the guitars play more melodic lines. I should mention that the drum and bass playing is very solid and I like the drum sound. Sand Palm V is a under 3 min piece that sounds like it came at the end of a longer jam but is pretty intense to start and I like the sound sample and the heavy almost doom guitar riff they use at the end, while the other guitar is very spacey. Dear Me has a flangy guitar and the vocals tell a short story. The drumming is more uptempo and contrasts the slow pace of the rest of the track. You’d make a lot of Money, one of the few tracks over 5 mins, and has some really cool guitar playing that is once again quite jazzy but with some effects on it and pushed to the right corner speaker before the other guitar trys to come in from the left side as they both solo away, making for a cool track. Death to Disco starts with an uptempo bass line and drum that some spacey keyboards float into the soundscape before the guitar player really enter the picture. The guitar player on the right plays some great leads while the one on the left makes a lot of far out sounds. It makes for an interesting contrast. Mag 3 has a funny hop to it and some spacey stuff and cool xylophone like parts and word samples. The Burrowers Beneath is nearly 9 mins and is slow and spacey track unlike anything else on the CD. Fading of my memories is the last of the person moments before the Sand Palm Vi and heavy ending track that takes us back to the beginning of the this album and has a quite hard and heavy sound and riff. Interesting CD…
http://www.16deadlyimprovs.com
Posted by Scott aka. Dr. Space at 9:51 AM