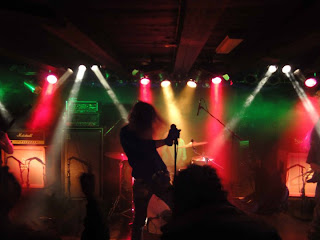 I was not sure how many people would show up for this night of very heavy music but it was around 100 people. Jens was the DJ and playing a lot of NWOBHW stuff people were digging it. A lot of the people I go to Roadburn with were there: Jens, Jakob, Nils, Nanna, Ole, Martin, Rhona, and even Finn! Sinister Creation () started just after 10 and played for about 35mins I think. Their songs are short and sound very much like 80’s rock and metal. A bit of UK NWOBHW and St. Vitus, etc.. Not many guitar solos and if so, very short as were all the songs. The band is young and fresh and not confident enough to really jam yet. They ended the set with a Witchfinder General cover track. Someone snagged the set list, so I don’t have it. Think they need a new name as there is at least one other established band with that name. I look forward to seeing them again. Martin was a good front man and sings with passion but I am not sure how good a voice he has. It was hard to hear where I was. Here is a link to a youtube video of the 2nd to last song. 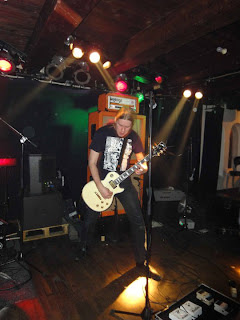 Kongh (), changed out all the cymbals and made an stack and after 45mins was ready. I had seen them once before at Lades with Ocean Chief (who I really liked) and was not really grabbed by this Swedish doom band. They opened with a pretty cool song and like the guitar player, who wears a YOB shirt, I feel they would like to be like YOB but I don’t much like the vocal or his guitar riffs. They are a bit boring and don’t really grab me at all. This band is only riffing and there was not a single guitar solo in their hour long set up 5-6 long tracks. No doubt they are heavy but they did not interest me that much. Bass player only plays the E string as most of these bands seem to but not all. Their last song was their most interesting and complex with a lot of different arrangements. Ok band.
Cough () was the first band of the night with two guitar players and it was after 01:00 in the morning before they started their brutal assault. They were in a good mood and when I asked the guitar player who also sings if they ever improvise he said no, they played the same thing each night. Every one of their 5-6 songs was like 10 mins long and they played one new one called Fuck UP. The one after called Acid Witch, was pretty cool and they are mostly pretty slow heavy as hell doom, but then they have these guitar breaks to do like solos but they are not your traditional guitar solos, they are more like some wah and effects and to make a psychedelic atmosphere, sometimes it was very cool and just what you really needed to break the slow wall of deadly DOOM they laid down. The singer was more or less unintelligible, the way he sang. Brutal HEAVY DOOM stuff.. 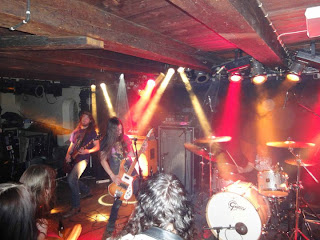