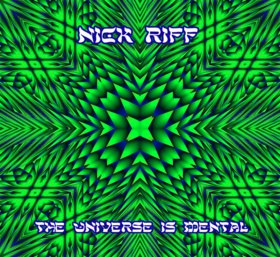 Nick is back with another record. I really liked his 2009 Photon Shift record but here he has made a mostly instrumental and really psychedelic electronic record. There are 9 tracks in 58 minutes and Nick plays all the instruments except some saxophone (on Forever) and woodwinds (on Heaven) by Jhaz Sigeret (what a cool name- Jazz Cigarette!). The opening track starts with a very repetitive kick drum that does not change the whole track but is not also tribal enough for me and layers of spacey synths and nice delay guitars. Ok track but it did not evolve much. Paled Vision is nearly 7mins long and starts with some synths looping and Nick comes in with some vocals here and there and a very spacey synth also goes in and out. Spacey stuff. Where are we Now has some drums but they are not adding a whole lot as they are pretty uninteresting and is mostly synthesizer based as well and very spacey. There is some very cool guitar in this track or at least I am pretty sure it is guitar that is highly effected. The limits of Perception starts with a repetitive synth loop from which the track develops and he has some piano like playing as well but again, it is very similar to the other tracks. Forever is a short 4 min track that Nick plays on the piano and vocals and features some percussion (which kind of disrupts the track) and saxophone. Sumerian Spacefort has some basic drum percussion and multiple layers of spacey keyboards and the lead keyboard has a sort of eastern flute like sound to it which is cool. Snake Charmers Ritual has some pretty cool synths and a totally different type of percussion-drum sound than the other tracks. Some of the synth sounds are really panned out to the sides and it sounds cool. Implant Procedure Explained starts with some very spaced out stuff and an highly effected vocal, maybe suppose to simulate an alien speaking to you about being implanted. Trippy stuff.  The track Heaven, ends your hour long journey into nickriff world with another piano track with Nick singing. Nick describes the record like this, “it is a collection of vibrations and frequencies arranged to connect on a quantum level with the omni-energy field, entering into the infinite mind, transcending the illusion of time.” Enjoy..
http://www.nickriff.com
Posted by Scott aka. Dr. Space at 9:42 AM