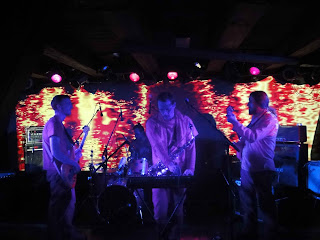 I was pretty sure that very few people would come out for this gig on this cold Thursday night. I had seen almost nothing about it on the internet so I was not sure how many people knew about. Anyway, I was looking forward to seeing this Croatian band with the ex- Seven that Spells sax player. We had met before when we played a festival together in in 2009. They did not start until 22:45 and there was about 40 people when they played. This was a damn cool band. It was all instrumental music with bass, drums, guitar and a guy who played sax and synthesizer (An old Roland analog synth). They played psychedelic rock but with roots in Balkan music. It was mostly pretty hard driving stuff with a bit of King Crimson, Hidria Spacefolk, and other influences thrown in. They played like 55mins and I really enjoyed it. About 15 of us were up in the front enjoying it. The sound man made an excellent sound.


Here is a video I shot of the band. http://www.youtube.com/watch?v=CxhZIqMKhgs 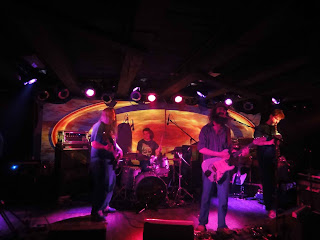 I last saw the Univerzals this summer at the Kildemose Festival and they debuted a lot of new songs and I had excepted to hear them tonight but was surprised they only played a few. They had a stand in drummer, so Troels was not there but he was solid. They always seem to start with Glass Skyscraper, which is a great song. Nick played a lot more guitar solos at this show than he did at the last gig I saw. This was the bands 3rd gig in a week and they were playing very well. I really like the lyrics Nick writes and the great psychedelic rock songs. They played several of their ska psych rock tracks that they did not play at Kildemose festival. The new stuff is generally less world music and has a harder edge to it. They played about 85 mins and it was a great show but too late on a Thursday night. I did not get home until 2.. Fun. Pity not more people were here.
Set List: Glass Skyscraper, E55, Contradictions, 7th, Spiritual Revolution, , Encore: The Mars Men
http://www.theuniverzals.com/ http://www.myspace.com/fjodorband
Posted by Scott aka. Dr. Space at 12:48 PM