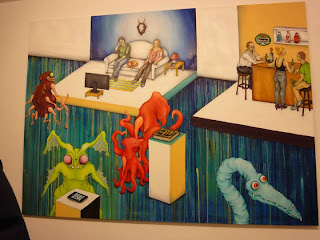 Papir are very cool young instrumental rock band from that are really doing cool stuff. I am really hoping that all these cool young people who hang out with them will actually get turned onto what they are doing. This is a cool little gallery with some had drawings, some real paintings, some sculptures, etc.. I took some pictures of my favourite things and they are up on facebook. See the link below. Anyway, the band started playing about 8 and within 3 mins the show was stopped by a neighbour who was not going to put up with the noise. A young girl who runs the gallery (??) she spoke to him and he gave the band 30 mins until he would call the police. 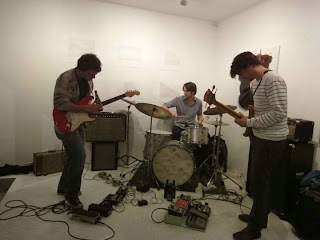 So the band played like 4 songs, jams in this 30 mins and it was damn cool. They seem to play different stuff every time I see them. One of the tracks this night the guitar player Nicklas played some really cool Robby Kreiger like guitar. It is hard to know what the hell the songs are as they never seem to have a written set list and it is all instrumental. They play really well together will cool musical grooves which lets the Nicklas really experiment and fly. It looks like the band will play two gigs with my band in March in . The crowd was all young people except for me, Tom and his girlfriend, some of which were at the bands LP release party in December. I wish they could have played longer but that is the way it goes. The link below is to some more pics of the band and cool things in the gallery.
http://www.facebook.com/album.php?aid=265973&id=668857671&l=a52b400276
Posted by Scott aka. Dr. Space at 7:11 AM