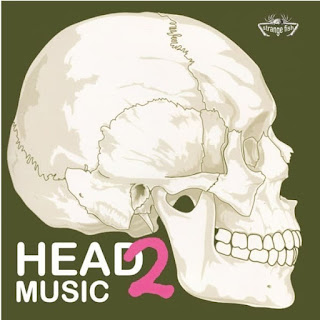 Fruits de Mer makes some of the world’s greatest compilations and tributes and there are so many killer tracks on this double CD/3LP set.   Most of the bands on here you will be familiar with if you know this label: Vespero, Cary Grace, Jay Tausing, Maat Lander, Schizo Fun Addict, Legendary Flower Punk…  but then there are some more obscure artists that I am not that familiar with like Spurious Transients (who cover two Kraftwerk songs), Das Blaue Palais (covering Faust, Amon Düül and Mythos), The Arthur Park (CAN), Rob Gould (Brainticket), Black Tempest (Edgar Froese), Revbjelde (Embryo), Tony Swettenham (Agitation Free).  CD starts off with Vespero, who perform quite cool and spacey versions of Amon Düül II (Between the Eyes) and Eloy- Castle in the Air (from the amazing album, Floating).  Their take of this track is a minute shorter than the original. Das Blaue Palais take on Faust’s Krautrock from their 1973 album Faust IV! This features some really nice guitar playing and layers of sounds. They also play a track from Mythos from their 1975 album Dreamland.  Both cool versions. Cary Grace does really well taking on Surrounded by Stars by Amon Düül II. Tony Sweetenham takes on Agitation Free’s Rucksturz from the 1st album, Malesch. The original is only 2mins but here it the main theme is played but he extends and expands upon this nicely with mainly organ and some acoustic guitar. Revbjelde take on Dreaming Girls from Embyro’s Steig Aus album from 1973. This version is more chilled somehow but maintains that nice ethinc vibe. Jay Tausing performs Father cannot Yell by Can from the debut album, Monster Movie.  This is quite a challenging track and very well delivered.

The 2nd CD (Lp sides 4-6) are not as rocking and more electronic and spacey with three Kraftwerk covers, Edgar Froese, Cosmic Jokers, Michael Rother (Neu).  Das Blaue Palais cover the early Amon Düül with a super spacey version of Snow your Thrist and Sun your open Mouth. Schizo Fun Addict have one of the most spacey and psychedelic tracks on the whole comp with Galactic Joke Part D (inspired by the Cosmic Jokers).  I had heard the version of Sonnenrad by Michael Rother before on one of the live shows by the Legendary Flower Punk.  Quite laid back. Rob Gould takes on One Morning by the Swiss act, Brainticket from their 2nd album Psychonaut!  Also, quite relaxed and some very nice piano playing.  Three out of the next 5 songs are by Kraftwerk- Neon Lights by Maat Lander, Autobahnmelodie and Autobahn Verkehrsgeräusche by Spurious Transients. I did not dig these very much.  I was totally caught off guard by The Arthur Park’s the sort of poppy cover of Moonshake by CAN.  A damn impressive compilation.