Frank Marino- Live at the Agora Theatre (Self Released) 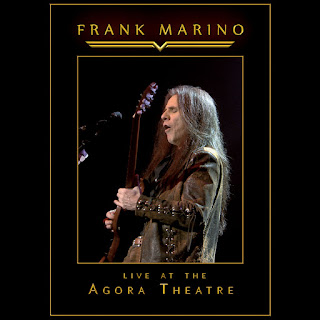 I have been a member of the Frank Marino message board since it began, so I have been able to follow the progress of this release, which was an incredible task for Frank to pull off. This is a 350min show taken from 3 sets that were played in December 2010 and filmed by Bruce Springsteen’s camera crew and recorded for a possible release. There had never been an official live DVD or VHS by Frank as he was never really into doing it.  The best that exists is from Don Kirshners Rock concert, The Midnight Special, and some Japanese TV program.

Anyway, it turns out after the shows that on both Frank's back up recording and the Agora theatre’s recording, that all the drum tracks were fucked. No one figured this out from the day before the shows soundcheck. IT was pretty devastating for Frank. So over the next 6 years, he made over 1.5 million computer replacements to completely replace all the drum tracks in a computer for the entire 7 hrs that was filmed. Insane…  Talk about dedication!

So this box set contains a 180 page book, 3 DVDs and a blue ray with most of the tracks from the 3 sets that were played that day in December. The audio is only stereo, no 5.1 but it sounds really fantastic.   This was the show of all time with Frank playing many songs that were never or rarely played live in the 70s or 80s.  The first two sets he plays a huge diversity of tracks from all his albums in current versions and not a lot of jamming involved. You also get 3 Hendrix tracks.  My favourite pieces from the first two sets are the amazing improvised Unchain the Space/Chains of Space that ends Set 1. In Set 2, the tracks from What’s Next and Rise Above just blew me away. He is such a great guitar player and still sings amazingly well.

Set III is very similar to the Real Live double CD, where he and the band just jam out on Poppy, large medleys of covers and his own tracks, etc.. Some of the playing is very intense.  Tracks like He’s Calling, Somethings comin’ our Way and Strange Universe are incredible.  The guy who plays the violin is often underrepresented in the DVD even though he plays for at least 30mins in the 3rd set.

I can image this would have been even better if he had gotten some sleep but he had basically been awake for nearly 2 days when they filmed this and he looks tired. The band is very boring to watch, this is all about the execution of the songs and playing the best you can. My main gripe with this DVD is the very fast editing. The camera changes every 2-6 seconds with the occasional 10-12 second still camera but this is mostly between songs. I still don’t get why they need to show the drummer or the back of Frank or change the camera 14 times during his guitar solo. Just show the best view and stick with it. That is what you do when you are at a show. You watch the guitar solo, you don’t look at the drummer, the bass player, the audience.. You watch the guitar solo.  Anyway, despite the expense this is an amazing release and I learned so much from the 180 page book with rare pictures and a detailed explanation of the whole journey to make this DVD for us.  For sure one of the best releases this year.