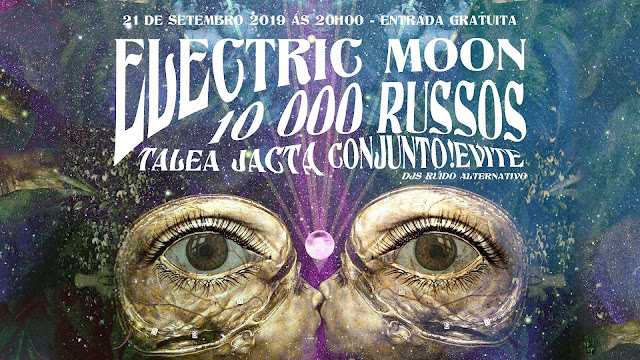 This mini-free festival with 4 bands was supposed to take place in a beautiful park in Santarém, Portugal but due to the fierce stormy weather with a lots of rain on this day, it was moved inside to a really nice place that was sort of indoors and outdoors but covered. Very nice place for a show and a big PA and not bad sound.

We all went and had a great meal at Restaurante al Grelha about 600m from the venue. We missed the start of the young 5 piece band, Conjunto!Evite.  The keyboard player was the leader and sang the vocals (all in Portuguese). They had two guitars, bass and drums as well. It was a sort of proggy pop thing with some good musical ideas but not that many solos and it was not really my kind of music. 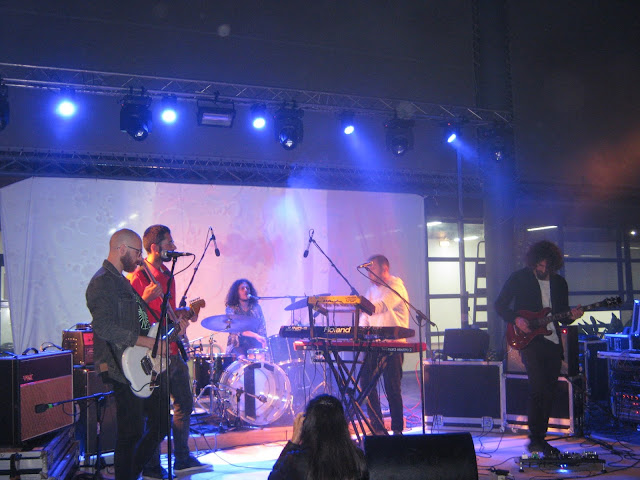 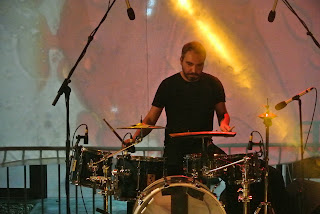 They started 20mins late and have a strict curfew at midnight so all was a bit rushed.  They had nice liquid light projections from behind the stage onto a transparent screen. IT looked quite cool but they were not really that strong and the white lights that the young light guy used a lot during the first two bands, made them barely visible most of the time. Anyway, Talea Jacta, did their thing and it was great. They have a fantastic drummer (João) and Pedro from 10,000 Russos gets to loop and space out on the guitar. I really dig what they do. My wife does not like them at all. They played about 45mins. 3 tracks, I think. They will have a double LP out next month, sort of  like the Black Bombain’s last record where they have different guests on each album side. 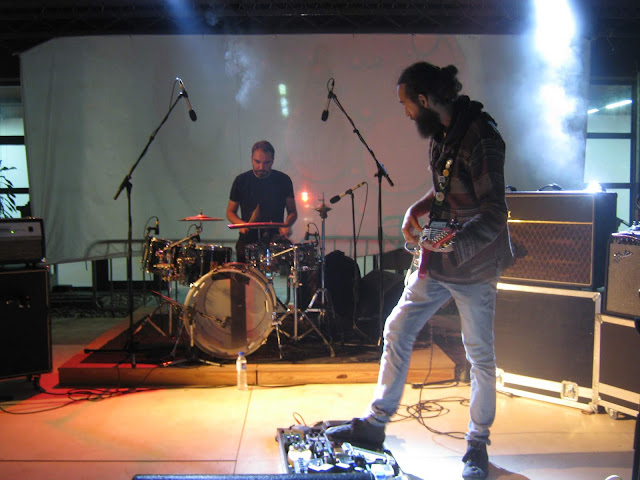 10,000 Russos, I had not seen since the Copenhagen Psych Fest 4-5 years ago now. Super nice guys and they started off playing some new songs off their album that will be out on Fuzz Club very soon now.  Their music is very hypnotic, like Neu with totally spaced out guitar on the top. The drummer does some vocals and uses some effects on some tracks. He played nearly the same simple drum line for the entire concert. Not sure how he does that while the bass and drums just compliment. Trippy stuff at times. People liked it.

Electric Moon was the headliner and this was their last of 3 shows here in Portugal. I had not seen them play for years and they had another new drummer this time. I have known Dave for 20 years and it was great to see him and Lulu again. Super nice people. They really like the Portuguese people a lot. Things were running behind and they seemed tired and were not in a hurry to play, smoking a pre-show joint with the Talea Jacta guys before staring. Anyway, they did 3 jams and only played like 40mins. It was not very inspired this night. The opening jam was the best and I am sure I had heard the great guitar line Dave played before. The drummer, Bernhard did not lead at all or try to push the jams, Dave played with his back to the audience most of the time and Lulu just followed the drums and was not leading the way either so it was all on Dave’s shoulders. He played some cool stuff but Pedro was way better on this day. He broke a string and then a 2nd string so they stopped playing. Audience really wanted more and was screaming but they did not play more. Pedro offered his guitar but Dave did not want to play it. Pity.. only 40mins as the headliner.  I felt they should have made more effort to play more but that was the way it was.. It was still fun and great to see them. Crowd enjoyed it. 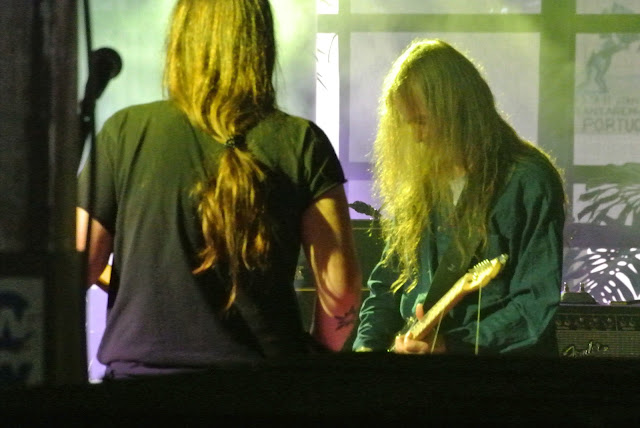