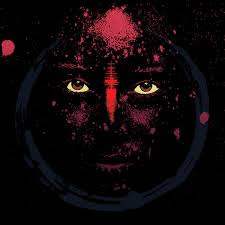 I don’t know if there is much point in writing about this split 10” release or not as it was made in only 100 copies and is long sold out even though it only came out in May!  The Måneskjold track, Solsejler, was released a few months back and also on a cassette release. I really love this Hawkwind inspired rock track a lot. I have heard it so many times now. Very much like Aerospace age Inferno inspired by Robert Calvert and even uses a section of this song’s lyrics in a small part.   The other track, Dolkhale, is an uptempo psychedelic space rock track with some trippy sounds in the background as the band just powers through at high speed to the other side of the universe!

Flip the record over for De Forbandede track, Åbn dine Øjne (Open your Eyes). This is something totally different. The track is sung in Danish and a moody slower, heavier track but also some nice melodies, with the guitar and keyboard.

Egne Ben is a more uptempo garage rocker with a organ and more powerfully sung vocal. A solid rock and roll number. This band has previously released a couple of 7” records and other misc releases but still not full length vinyl LP.. I look forward to that.. Enjoy, this rare 10”, if you can find a copy..