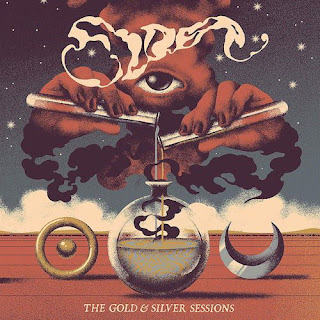 Elder are back with a new EP.  It was supposed to be released first as subscription only via a new label by Jadd of Meteorcity (Post Wax) in January and here it is mid-June and the special subscriber edition still has not arrived and people on the Elder Tour in May actually got the record via Stickman before the subscribers (I just got mine, not even the special version, June 10th).

Anyway, I was able to hear these tracks last October as the band gave me a preview of one that was a jam that we might play live when I joined them last November in Porto for a gig and they visited my house. Anyway, this EP is three instrumental tracks. Illusionary Motion is one of the most relaxed Elder tracks you might have ever heard. A very cool spacey sort of jam, you would never have expected from these guys. I dig it…  IM Morgengrauen, is largely a Nick solo track, as he played nearly all the instruments and it was constructed one track at a time.

Side B is a long krautrock like track, very repetitive rhythm but some nice guitar lines and floating keyboards. This track takes the entire album side (about 15mins). Nice to hear the band do a bit of jamming and take their music to another realm. IT takes a long time to get a guitar solo but we get a bit of one at the end. Great build up.  Some of the hard core fans might not like this but I loved it. Great work guys..