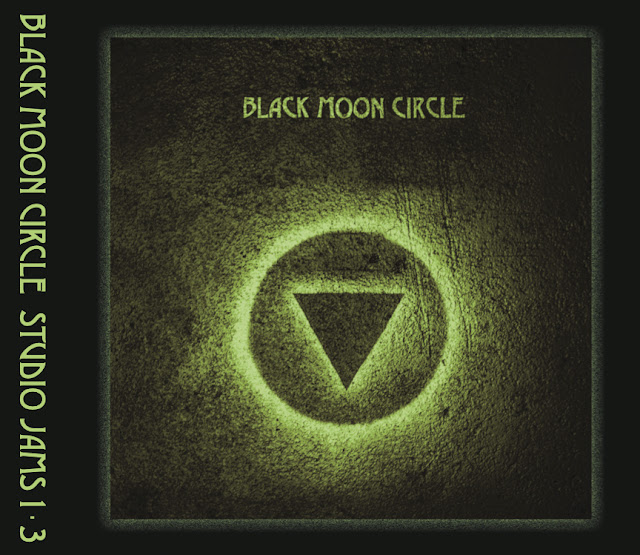 Black Moon Circle is a band that I have been playing in since nearly the beginning of the band, after we met in Copenhagen in 2012.  It was my idea that we should release a series of studio jam records and these were all only released on vinyl and mostly sold out long ago. We decided to dig into the archive and go back and find a CD of bonus material to finally release this series on CD. To our surprise, we found there was so much great material from the 2013-2015 studio jams, that we ended up with 7 tracks, spanning over 150mins of bonus material. 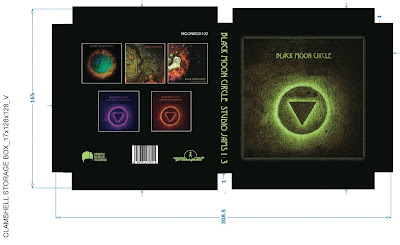 CD1 starts off with our first ever jam together in April 2013.  The next jam, Lunar Orbital Escape Rocket, actually features a few guitar lines that we would later develop into parts of Warp Speed.  A very intense jam, just powerful bass and drums and later on the guitar…. Wow……  Super Dude and Orbital were from the jams in 2014. Super Dude has a great almost fuky groove and a mean and nasty guitar tone. The synth and guitar freakout is just awesome on this jam. This is really heavy psychedelic rock and roll!  Anti-Reality Vehicle, is from 2016 and features Snah, guitarist from Motorpsycho. This is a slow building journey that gets pretty heavy and loud at times as it goes through several stages with some very cool guitar parts and spaced out synths.

CD2 starts off with the first of 3 long jams and is taken from 2014, the Interstellar Orgasmatron. This one has a slow spacey build with some cool reverberating guitars to start as the bass and drums create the build up.

These titles were all made up for the box set as they were all just numbered as Jam 1, Jam 2, Jam 3, etc.. before this compilation.  Nebulacide and Drowning in a Sea of Fear are both from the 2016 session. Nebulacide is a creeping jam, that grows up in layers of sound between the bass, guitar and synths. Eventually, a steady groove and bass line emerges and off we go into the outer reaches of the universe at a slow pace. A mind melter this one. Drowning starts with a heavy distorted guitar and bass interplay and then Peran decides it is enough and kicks in with the drums and Dr Space adds some, well, spacey stuff.  Such a killer guitar tone on this one.  At 18mins there is a great guitar solo and later, when you think the track is over at 27mins, it starts again with the same opening guitar riff and the journey fades out at 34mins..

The box set turned out really excellent with the original artwork for the 3 Studio Jams replicated (with some minor changes related to the text, not the images) and two new covers based on the bands logo. A 8 page book with some photos, history as told by Dr Space and complete liner note info about the LPs, bonus material and a discography up to 2019.  The box set is a great value for the money as you get about 280mins of music for 30€!! Lots of incredible space rock jamming from this amazing Norwegian band.  Check it out..

http://blackmooncircle.bandcamp.com
Posted by Scott aka. Dr. Space at 11:46 AM