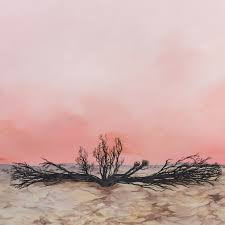 Mountain Dust is a Canadian band and really nice guys and powerful emotional live band. ØSC played with them in Berlin last year but I have never heard any of their records. This is their 2nd full length record. They have also released a 7”. The title track starts things off with a mid paced rocker with some powerful vocals, and the main melody played by the organ. There are some short guitar solos thrown in here and there as well. Lots of changes in this track and it really rocks to the end. Powerful starter. White Bluffs (See the official video below) is a more moody track with a nice bluesy feel and great vocals but also quite heavy at times.

Turn you In starts as a slow ballad with some great vocals, inspired by the best of the US southern rock vocalists. The pedal steel is quite spacey on this one and then the track gets quite dramatic and powerful as we close in on the 2min mark. The organ takes over later on. Inside the Rift is a more footstomping track with a bit of an Uncle Acid (the first record) feel to it. The track builds a tension in a brilliant way. Track has a lot of different changes in it as it grows before coming back to the main vocal lines. This track really could have been more jammed out. The band has very few guitar solos on any of the tracks. You Could ends side A and is almost like a horror film track with the eerie organ and dramatic parts. Passionate vocals. Into the Depths is another mid paced one and also very dramatic and one of the most heavy guitar riffs on the record. Almost doom, but not quite. The keyboard around 3.5 mins draws the track to an end. Witness Marks starts with the piano and one of the best vocal performances of the record. The female backing vocals are quite a nice touch on this powerful ballad. Wow. A true highlight of the record and what lyrics as well (“When the devil comes to ruin your life”). Old Chills is slow moody track to start with pedal steel. The organ takes the main lead though and makes the track sound a bit too much like some of the others. It does feature the only track with a longish guitar solo section with both the pedal steel and other guitar player taking parts. Should have left the organ off this one and focused on the guitar instead. Stop Screaming is the final track and starts with a nasty distant guitar and harmonica as the mood is dark with the pedal steel as the main focus. The vocal style is more laid back to start but then evolves into another epic performance. Some nice guitar parts and solos on this track, which has a very heavy ending.  This album reminds me of the Danish band Grusom at times, both the way the songs are heavily organ based and the singers have a sort of similar singing voice and intensity.