Interview with Luis Simões of Saturnia

Luis is a multi-instrumentalist that has been making music under the name Saturnia since the late 1990’s. He lives near Lisboa and in his Butterfly Studios, plays a huge range of instruments and on most of his albums he plays everything.

His music is very much inspired by 1968-1972 Pink Floyd, the more mystical side of the early 70s German bands.

Luis’s newest album is something different though. Here he gathered two of his musician friends and decided to choose a number of songs from all of his previous albums and record live over several days. These were later mixed and then mastered at the Electrohasch studio by Stephen Koglek (Colour Haze). Electrohasch has for many years, released all of the Saturnia albums on CD or LP, including this new one.
I recently caught up with Luis to ask him some questions.

Did you grow up in a musical family? What was the first instrument you played?
Luís Simões - More or less, my father had some LPs, he liked light Jazz and Blues/Gospel type of music and my mother had a good voice and she sang in a amateur choir, more of a classical type. The first instrument I played seriously was guitar. 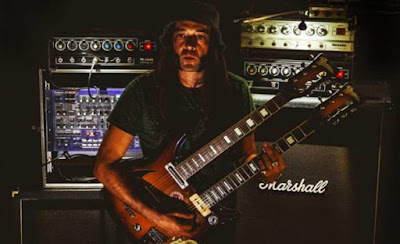 You play many instruments very well. Did you have proper musical training? Attend a music school? Was guitar always your primary instrument?
Luís Simões - Yes I did, although incomplete. I studied classical guitar when i was a teenager in a proper music school but that was all over when i spent all the money I had saved for years and bought a Korean Gibson Explorer copy. My parents were very worried.
Guitar was always my primary instrument, but at a certain point i started noticing that i could do more than just fiddling on other instruments, initially other stringed instruments, then keyboards and so on. It was when I discovered the versatility of musicians like Brian Jones, Steve Howe or Mike Oldfield that I realized that that was something for me.

Your music (to me) is very inspired by 1968-1972 era Pink Floyd. It is a reference that I hear a lot when listen to your records. I assume you are a fan of Pink Floyd? What other older bands have inspired you?
Luís Simões - When i was 16 I used to play bass over the Pompeii VHS tape but I hardly listen to them anymore.
If you like Psychedelic, Progressive, improvisational, sophisticated, exploratory Rock music, you can't avoid them, they pretty much invented it. This "Floydian" vibe is essentially a mood and a type of musical approach and philosophy that you will find in many other bands of the same period like Hawkwind or some German bands like Yatha Sidra or Pulsar from France, which are one of my favorite bands ever. I see Saturnia as the natural descendant from those artists in the 21st century. (So do I Luis!!)

How did you get interested in playing the sitar? It is not very common in Portuguese Music.
Luís Simões - Curiously, when most people talk to me about the Sitar they assume i picked it up because of George Harrison and The Beatles or Ravi Shankar, maybe because of the "spiritual" overtones on Saturnia's music; but it was because of Brian Jones and Paint it Black, i remember the first time i listened to that song, i was in absolute awe.
Another very big thing for me was that Manuel Cardoso had a Sitar on the two first Tantra albums, which was terribly cool. Curiously, my Sitar approach is closer to Exotica and stuff like the Vampyros Lesbos soundtrack than actually Indian Classical music.

What bands did you play with before deciding to make music all on your own?
Luís Simões - Before Saturnia i played in a spoken word duo named Friends of the Locust, we did one demo in 1991, I also played in a classical Portuguese Metal band named Shrine, we did two demos and two albums between 1991 and 1996, and still have quite a cult going on over here. From 2003 until last year i also was in another band, which was very big over here in Portugal, Blasted Mechanism, with whom i did five studio albums and a live album. I started Saturnia in 1996 and I'm still doing it.

There is a lot of complex symbolism in the artwork on alpha omega alpha? What inspired this album artwork? Can you also speak about your other early albums artwork?
Luís Simões - The artwork for AOA is structurally inspired in Masonic charts in its form and was designed to translate to image the musical and metaphysical components of Saturnia and Saturnia's music; my thinking process, my past and my projected future, so from this perspective it works like a sigil. Each and every symbol has its meaning and spell, so it is also a magic thing. It's the visuals for the psychedelic Grand lodge of forever, if you like. The AOA artwork is the only Saturnia cover that isn't photographic. The other album covers also translate their own different concepts to image in different ways, for example, on The Glitter Odd artwork the background is the actual wallpaper in my bedroom at my parent's house, because the whole album rotated around the general idea of someone listening to an old LP in his bedroom; on the Muzak album the photos relate directly to the song's individual themes and are presented like in a gallery.

Describe how you go about making a song from scratch. What instrument do you record first? Do you write out the music on paper?
Luís Simões - Although i have no set way to do this, I generally jam some guitar or bass or keyboards with a generic aesthetic idea, concept or vibe on top of a beat for a while and see what happens, i start working around those original improvisations adding other components, like vocals or more instrumentation, when i have a good mass of raw tracks i then start cleaning up and digging for what is the core identity of the piece, both from a purely musical and thematically perspective. Basically I gather sonic clay, listen to what it suggests to me and then sculpt it. I only write music when I have to communicate with other musicians; on my own I just record everything.

What is your studio like? Do you record to analog tape or use the computer (Logic, Cubase, Pro Tools) or a mix of both?
Luís Simões - My studio is a very simple DIY functional thing. I use both analog and digital gear to record and play, it depends on the musical situation itself. As far as recording is concerned, the practical side of analog is awfull but things always sound more dynamic and generally better, digital is more practical and offers more working flexibility but always sounds harsher or at least a bit stiff. Nowadays it is "de rigueur" to like analog but most people forget that there is very bad analog gear, just like there is bad digital gear. When I started, there was basically just analog and it was forbiddingly expensive to do a good top production, with digital that really changed, fortunately. I really think that if all the older artists that recorded analog in the 60s, 70s and 80s, had a choice back then, they would have recorded on Cubase.

Lets talk a bit about your new album, the Séance Tapes? Where did the idea for the title come from? How did you chose the tracks from all your different albums? You actually formed a band for this album. Had you previously made music with Nuno and André before? What bands are they from?

Luís Simões - Well, I think that at this point in time, for a regular artist it would be time to do a Live album, which i think wouldn't be really honest as Saturnia never really played live that much; another possibility would be to do a compilation, best of type of album, which would be just boring, so i did something inbetween and did a "live in the studio" album. This album, instead of a spiritualist séance, is a musical seance in which we are visited by songs from Saturnia's past, that's the concept for the whole record. For reasons related to my personal life and other musical projects i was involved in up until recently, i wanted to do an album as fast as I could to keep me moving onwards, so I got in the studio, played for about a week and recorded everything we did, this album is basically a rehearsal recording, everything is loose and natural. After that i picked the best takes, mixed it and finally mastered with Stefan Koglek. This one was that straightforward, i didn't wanted to do something polished, i wanted this to be the raw Saturnia, I've done a full circle in life and my Rock roots are really evident on this album. We recorded more material than it actually ended up on the album, i tried to provide a setlist that would synthetize Saturnia for someone who has never heard  it, that was the criteria, to do an album that explained Saturnia; curiously it ended up being exactly two tracks from each album, that just sort of happened .

Why no bass player? You play bass on a lot of your songs.

Luís Simões - Yes  I do, I play electric bass on all Saturnia tracks, on all the albums, with a couple of exceptions. For this album I wanted to keep things as simple and real as possible on all fronts and i love working in trio mode, which I think is the best for Saturnia. This album just reflects what Saturnia is in its live, present day, incarnation.

-Are there plans to keep this trio together and record a proper album together, perhaps play more concerts inside and outside Portugal?

Luís Simões - Yes, It's my intention to keep working live, both in Portugal and in Europe with the trio line up. The next album is not going to be like The Seance Tapes but i liked the spark of interaction and i plan to produce it in slightly similar ways, so part of it is going to be real, live takes, that’s for sure. I don't really know when this is going to happen but i do have lots of new material, maybe for next year or 2020 there will be a new Saturnia album.