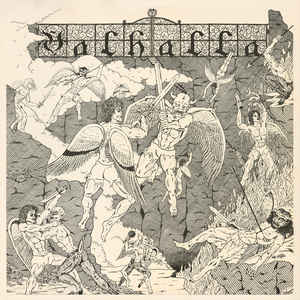 This band has an interesting story. Starting off in the suburbs of Pittsburgh PA in the early 80s. They released an EP apparently to some acclaim in the media at the time. They played around a lot but wanted something bigger so they all moved to Phoenix, AZ and that was the death of the band, due homesickness, diabetes and other band offers…  There is not a lot of info about where or when this material was recorded (1982-1984). The album features 10 songs. I would say that the music is a bit of a hit or miss for me. Tracks like Looking for the light with these pad keyboards, that I hated in the 80s music, were not for me, while tracks like Night Stalker were more aggressive and the keys a bit more progress and it has a cool panned guitar solo. Valhalla is a bit spacey at times with some effects on the vocals and has some great guitar work. A very cool song. The singer has quite an impressive vocal range on side A. Side B seems to be older tracks as the sound production is a bit different and the vocals and playing not as strong as on the side A. Quite an interesting time artefact to release in 2017.. Check them out… More cool releases coming from WYLN in 2017.