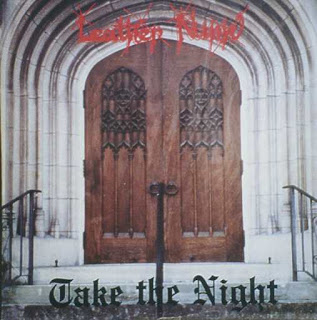 Leather Nun was a Jacksonville, FLA heavy metal band formed in 1983. This album came out originally in 1986 and sadly the bands path to glory was cut short by a car accident! WYLN has reissued it with the original artwork, a 11x17inch poster, insert with some info and lyrics, and a download card. It is pressed on red vinyl. This is a band that I never heard of even though this was the time when I had my Metal Madness Fanzine and I heard a lot of Lps and demos. 100’s….. The album features 9 tracks of pretty straight up 80s metal. Wade has a pretty cool voice, the band had the looks and some really cool nasty lead guitars by John and Jerry. A very solid, but dated sounding release today. The band was for sure big fans of Motley Crue, Leatherwolf, and others at this time. Not as heavy as stuff like Nasty Savage, Savatage, or Death. Quality and well recorded heavy metal… Check them out..