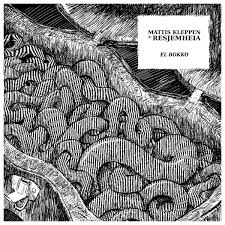 I was lucky to be in Trondheim when this album was being released. The first 300 copies come with a CD of the bands first record as well as this one. The 3D cover is pretty mindblowing, one of the coolest I have ever seen. (see video)

Anyway, Mattis is a local bass legend of sorts and on this record he also plays 12 string guitar. Kenneth Kapstad plays drums, Kristoffer lo Fender IV, flugabone, tuba and effects and Ottar Kåsa plays the harding fiddle.  The music is a sort of melodic, folk experimental vein. The Midens of Kivle Valley and Ali starts things off and this is lead by the bass lines of Mattis, while the rest provide some nice melodies in the background. Resjemheia and Nordafjøllsen is a more uptempo track with a full drum kit and some nice double harmony parts between the bass, keys and other instruments. The fiddle plays a major role at the end of the track as the feeling gets more dark and eerie. Very cool stuff. Jesus makes me Quiet has some quiet droney horns in the background while Mattis plays some bass lines over the top. Eventually a sad fiddle comes to compliment. Air Mali brings back the full drum kit and more uptempo track with a great interaction between the players. El Bokko features some guitar and the bass and drums playing together more like in a groove and a kind of awkward guitar solo is played over the jam (thats what it feels like). BB's Song reminds me of Tom Waits with the simple drums, bass line and sad horns. Keef in the Desert is another that features the full band. Afrobiker is an uptempo track lead by the bass and it has an intense rhythm with some nice interaction between the bass and fiddle. Helga Djuviken is the last track and features the fiddle playing of Ottar at the start but then the whole sound sort of dissolves into a mass of sound and chaos. This is just fantastic stuff and I like it the more I hear it. Nor really folk or jazz, but some sort of dark instrumental folk melody inspired experimental music. They were having fun making this one!