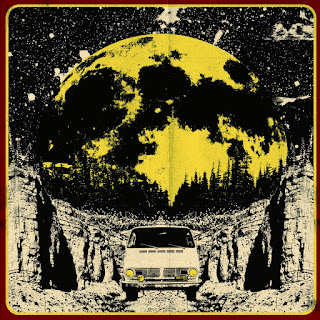 This split 7” is released for the summer Mos Generator/Year of the Cobra US tour. Both tracks are unique to this 7”. Mos Generator start things off with a track that the band recorded in 2 hrs direct to 4 track cassette. Only the vocals and mellotron were added later. Gamma/Hydra is a really cool track with a King Crimson like feel at times but no intense guitar solos.  Raw but cool stuff. Tony loves King Crimson! The Siege, by Year of the Cobra has a totally different mood and driven by the bass lines and female voice. Not much else it can be driven by given the band are a bass and drum duo!!  The 7” is made in 280 copies (50 gray, 50 white, 80 gold and 100 black).