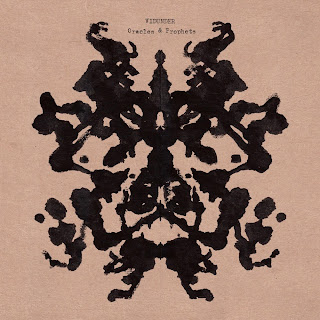 Vidunder is a fairly new Swedish band from Malmö. I had previously reviewed their first 7” and full length records here on my blog and I had seen them live once or twice as well. Since their first releases the band has added Johannes on the organ and this has made a huge change in the sound and dynamics of the band. I was pretty disappointed with the last release, as I felt it lacked much originality and the band was trying too hard to sound like Graveyard and Witchcraft. This album shows a major growth from these guys from Malmö.  The album starts off with Gone with Dawn (See the very cool video below) an mid paced track that sets the sound and sound plan for most of the record; heavy rock with a lot of organ and catchy songs and some nice lead guitar. Son of Every Lie is also an uptempo rocker but with more focus on the guitar than the organ. You slowly get used to Martin’s vocal style which is quite special. This track is very much like Graveyard but with an organ. Phoenix Cluster has a happy feeling to it and maintains a mid-pace. It reminds me a bit of a more commercial Big Elf but not so bombastic! Martin’s guitar playing has really improved as this band has played and toured a lot. The mid-section of this long song has some spoken word over under the long solo and spacey organ sounds. Great song. Kalhygge is a short instrumental track focusing on the organ playing of Johannes. The Owl has a familiar sounding riff to start the track. The vocals is a bit like the Big Elf singer to start but then it changes as the track gets heavier and more dynamic. In and out of Mind is a really great rock number with some intense guitar. Twisted Faces is a pretty straight and more mainstream radio friendly track but it does have a short guitar solo and the chorus repeated many times over and over. Soon Gone is a proper ballad and slows down the pace of the record. The title track ends the record with another uptempo track. If I have a complaint about the record it would be the organ is nearly the same on all the songs and always plays exactly what your mind would tell you, not very exploring or pushing any boundaries, and always playing it very safe.  Fan of organ driven revival of the 70s sound from Sweden should enjoy this record.

http://www.crusherrecords.com http://vidunderband.com
Posted by Scott aka. Dr. Space at 11:48 PM