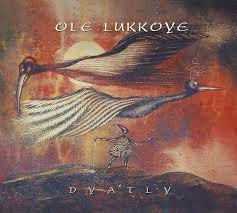 I have been waiting for years for this new record to come out. It was recorded nearly completely live in the studio on two different dates in 2013 and then they spent the next years doing some studio wizardry and a few overdubs. The CD is made up of five long tracks spread over 67mins. Two of the original members of the band (the leader Boris) and long time bassoon player, Frol but all the rest are new players with Boris and Ness on vocals. The music has that feel of the early albums and you slowly get totally sucked into it.. Kommuna-Ra starts things off with a wolf like howl but the programmed drums and sounds kick in as the hand drumming is layered on and the hypnotic vocals and then the bass line starts to drive the track. The keyboard line that is quite common in some OL tracks precedes the vocal of Boris. He wrote the lyrics but the female vocal singing is mostly improvised. Very hypnotic. I love that sound when Frol kicks in with the bassoon. Dyatly (Woodpeckers) is the longest track at 17½ mins. His tracks starts off with most vocal improvs and percussion and drums before the bass line joins in and then some guitar. It slowly builds and you get transported away into the OL world as more layers of sounds come and go as do the vocals. Bela Dama begins with a harp like instrument and some layers of synths and sounds and then the vocal comes as the drum (kick) and then the rest of the programmed drums as you slowly glide like on a sea of sound. Very dreamy and trippy this track but also one of the more uptempo ones. Just Wind features a real drum kit and has some trippy manipulated voices and sounds at the beginning before the track heads into the same territory as the previous tracks but is more electronic in nature. Veni, Vidi, Vici is a short 4 min track that ends the CD as if you have been dreaming the whole time you heard the record… I have always loved the music of this band and this is going back to more of their early sounds but still a lot of programming on some of the songs and maybe a bit too much of the same after a while by the time you get to track 4. Still… a cool return.

http://www.trailrecords.us http://www.olelukkoye.ru
Posted by Scott aka. Dr. Space at 11:48 PM