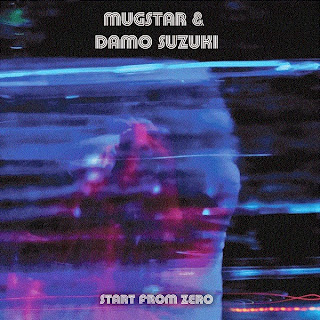 As many bands in the past, Mugstar has also performed with legend Damo Suzuki. This concert was recorded back in 2012 in Liverpool but only recently released on Important Records. It features three tracks on with a collage of live pictures from the show. Waken to the Night is a long track and starts things off with a Damo vocal improve as the rest of the band kick into an uptempo track with wah guitar. The middle of this track has some really cool super effected guitar and is really psyched out Peter plays some synths. The end is very intense. Very cool song. Subway Sound is a short 3-4min or so dreamy piece that moves directly into Innanewah which has a far out synth line that goes straight into your brain the way it is mixed as the band are pretty noisy while the drums and bass maintain the groove and neil does his guitar thing.. Cool stuff.  You can actually tell that Damo is singing mostly in English on this set of songs. While some bands allow Damo to really push the band into a totally different direction, the band seem to do the Mugstar thing and Damo just has to sing along the best he can to what appear as “real” mugstar instrumental songs. I know it is not that way actually, that is is all more or less improvised. The long B side is more of a jam though called Zero Coda and it lasts like 25mins and has a massive freakout and psychedelic section with no singing by Damo.. If you like Mugstar and Damo, you can’t go wrong with this one. There is a teaser below and if you search you tube there is a short video from the actual concert but the audio is quite distorted. Enjoy.