THE SEVENTH RING OF SATURN- ORMYTHOLOGY CD (US 2015) 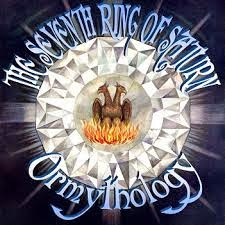 TSROS is a band from Massachussetts in the USA. They have appeared on a number of Fruits de Mer tribute albums with covers of the Beatles, Hollies, and others as well as original songs. The band has made one full length record released on Nusrat in 2007. This CD-EP is all new material (2 original songs) both songs and instrumentals but also includes on cover song of Hurdy Gurdy (an old Danish band) and two others. The CD comes in a very simple thick white cardboard sleeve with two printed stamps on it. Inside is a sleeve with the CD and a white paper with all the details. There are specific notes of how plays what for all 8 of the tracks. The CD starts off with Burning a Hole. This is a happy song sung by Ted (who plays bass on all track) and he also does the guitar solo. I would say the track is inspired by the likes of the Bevis Frond and 60s bands… Teli Teli Teli is an instrumental track with a bit of an eastern feel to it and includes Joe and Ted on sitar guitar. Time to Fly is another good rockin’ 60s inspired track with a the guitar solo mixed well up front (nice..). Karli Daglar is another instrumental track (just bass, drums and guitar). Faces is a more moody track with a cool bass line and nice wah guitar by Jacob Brown. Yedikule is another instrumental again with this eastern feel but not sitar guitar this time.  Uzun Ince Bir Yoldayim is another instrumental and features the sitar guitar briefly (does not list it but sure sounds like it) and Jacob returns on lead guitar. The last track is a cool cover of the track Spaceman from the Danish band Hurdy Gurdy! If you are a fan of the band, you will like this for sure… I have put a link below to a great interview with the main man form the band Ted.