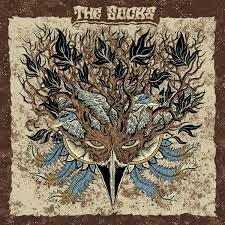 The Socks are a new French band on the awesome Small Stone label. The band is  really rocking out with a 70’s vibe for sure. They are a four piece band that have heard a lot of the current crop of Swedish bands like Graveyard, Witchcraft, Horisont and others, but they throw in their own twist here and there. The album starts off slow and building with Lords of Illusion. This one starts to build up with the rhythm guitar player Nicklas also adding some keyboards. Julien takes care of the lead guitar, lead vocals and can sound exactly like Eric Wagner of Trouble! This track really rocks out at the end. Some Kind of Sorcery sounds like they stole it from Graveyard. A high energy and passionate track but almost a cover song. Next to the Light slows things down and shows the strong side of this band, with great dynamics of guitar and keyboards and passionate singing. New Kings is back to the Graveyard boogie and vocal style with a hard hitting riff mixed with slower parts. Holy Sons is a great song and one of their most original with a heavy riff combined with the organ in a really effective way. Julien plays a very passionate solo and this is the most jammed out track on the record. Electric War goes back to the uptempo Graveyard style that they emulate so well. The mid section is a bit more doomy like Trouble. Nice double tracked wah solo as well. Gypsy Lady has a cool footstomping groove with a nice organ line that drives the track to start and another one of their more original sounding tracks. WE LIVE (not the Electric Wizard song!) is driven by some cool bass lines and aggression which comes and goes. The CD ends with another very Graveyard inspired track called The Last Dragon. Almost a cover song, it is so close to the Graveyard sound and feel. Anyway, despite them borrowing a few too many ideas from Graveyard, this is a solid record. This is a record, like most, that sound best when cranked up really LOUD… I hope to catch these guys live soon..

http://www.smallstone.com http://thesocks.bandcamp.com
Posted by Scott aka. Dr. Space at 11:10 AM