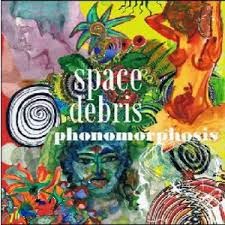 The German instrumental band Space Debris is back with another 4 track double studio album. Sides A-C were recorded in August 2013 and side D October 2013. The band has a new keyboard player (Winnie) from the last studio album that I heard. Each side includes track that fills the entire song. Side A starts off with Colossus Stranded, a piece which has some singing here and there by Magic Petra, who did the fantastic artwork. The piece starts with a slow build and long organ solo. Magic mixes in some singing that I am not so fond of and this leads into a longish guitar solo and Winnie switches to the Fender Rhodes sound and a more upbeat heavy jam begins. The band is really great at keeping things dynamic, if they had a 2nd guitar player they could create dynamics like the Allman Brothers. Side B is the title track and starts off with some pretty cool and far out keyboards and then Tommy kicks in with some jazzy guitar but the whole thing really builds up and gets quite funky and psychedelic. What a great jam… Side 3 starts off with the Fender Rhodes solo and then the bass and other instruments slowly enter. The piece has a quite happy mood to it. Tommy sort of takes the lead for a while on guitar and then Winnie switches to the organ and they do a bit of back and forth intermingling for a while. This track is more loose and jammy and everyone plays to a really high level, with Mitja really grooving on the bass and Christian on the drums as the track just builds and builds. Journey back to the Moon ends side D and is another long jamming track with a bit of an almost Spanish style theme to it to start. The track comes to an almost complete stop where you might think it is ending but then it slowly grows with a long guitar part complimented with some nice drifting organ. The track does actually stop completely and start again, which is quite strange before fading out one more time… Cool record..

http://www.spacedebrisprojekt.de/
Posted by Scott aka. Dr. Space at 11:11 AM