Taste the Doom is an interesting event. This is the 8th one held and the first in Denmark. It is a whisky tasting and Doom listening event. There are 7 whiskies from around the world and they have carefully selected music to go with the whisky. You get 2cl of each whisky, which is just the right amount and a new whisky about every 25mins. They only sold 15 of the 30th tickets but this is probably due to all the Christmas parties going on at this time a year in Denmark. It also said on the Mayhem web site for weeks that it was sold out, when in fact it was not. I met up with Tom and Jens and the photographer, Jacob was also there. Other than that I did not know any of the other people but I think they were all whisky enthusiasts and not into the heavy music, while we were the opposite. I think we were the only ones who knew the bands that they played. 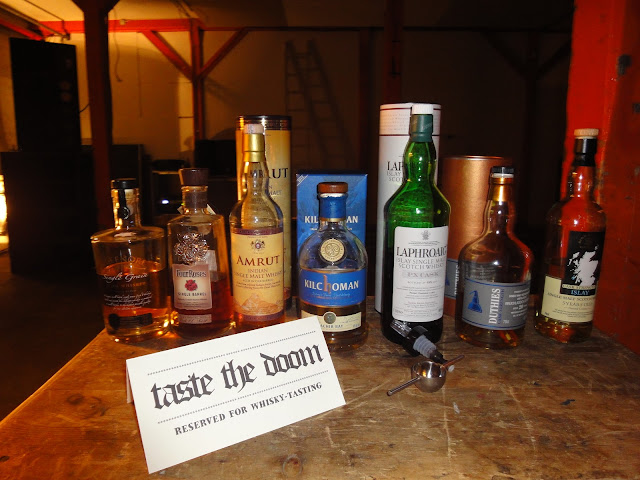 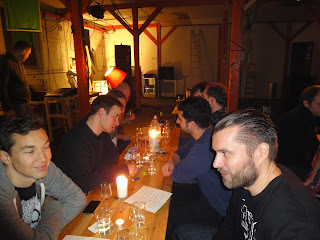 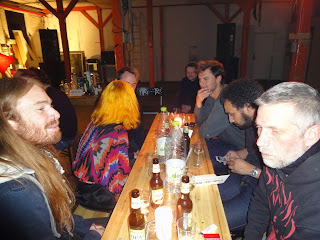 So we started off with Greenore 8yr single grain 40%. This was a light and very smooth whisky. We heard Year of no Light- Hierophante and Deathspell Omega- III. The hosts were quite funny and gave nice introductions to the whisky and the music between each one. Next up was an American single barrel bourbon (Four Roses single barrel 50%). It had a very unique flavour and the characteristic sweetness that bourbons have but it was good. We heard a great long track by Boris called The evil one which Sobs. Next up was the my favourite whisky. I had never tasted anything like it. Amrut 46% from India. They told us the facts that India is a huge whiskey drinking country. This was really great and for that we got two tracks, YOB- Before we dreamed of Two and Fetish69- Antibody. By now, people were a bit more animated and feeling good. The Kilchoman Machir Bay 46% was you real “Scotch” whisky. Smooth, very smokey, earthy… Weedeater- Bull was a perfect choice. Fistula- Burn the Ladders closed it off. Next was a very special Laphroaig PX 48% that you can only get in airports. IT has this really special flavour and was very nice. It was changing all the time the way you responded to it so we also had three tracks this time with Weekend Nachos- Unforgivable, Thorr’s Hammer- Norge and Dopethrone-Dark Foil (Great song…..). The next one was the best of all the whisky. This was the Duthies Bruichladdich 20yr CS 52.2%. Wow. That was fantastic. For this we heard UfoMammut Aureum and Infearnatural. The last whisky was extremely powerful and evil stuff. If you held this one in your mouth for the 12 seconds you really got hit with the alcohol, the dirty of the earth, the vapours filled your head and you nearly would fall out of your chair! The music was also insane with Meth Drinker and MOSS..

IT was a really cool evening and I would for sure do it again if they bring it back to town. It was 222kr and a really fun 3hrs…