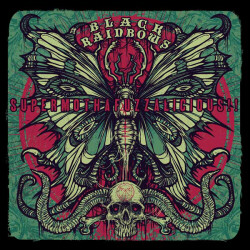 Black Rainbows is back with their 3rd release. If you are not aware of this band, they are a trio from playing fuzzed our rock and roll. Burn your Nation starts the record off. The band really has a great rock and roll groove and I like the bits of effects on the voice to give it a bit more of a psych feel. Behind the Line is another mid paced rocker with a similar start stop guitar riffing style, a bit like FuManchu. Mastermind has a very cool flanged out guitar at times and a nice solo section. Cool song. Feel the Beat keeps the hard rocking stoner groove a live. Solar System reminds me a bit of Nova Driver, if you know this Small Stone label band. I like the synth or guitar pedals sounds that move around in the background on this one. Great song. Anyway, Lady, the longest track on the CD is next and back to the stop start R&R riffing but it has a quite complex instrumental section that leads into the wild solo psych part. Brain Circles is a bit like a Radio Moscow song, a bit more bluesy but not so raw and a less intense guitar solo section. I love Rock and Roll is next and it is not the Joan Jett song! A slower also four bar blues rock song where all he says “I love Rock and Roll” over and over and then it changes and has a great ending with some of the best soloing on the record. The last song is called Cosmic Flower Blues and is under 2 mins long and really a pity it is faded out as it is a really cool track.

It is a pretty cool record but you might have a hard time remember one song from the next as it the same style and uptempo stuff all the way through the record with just some slight variations of the riffs, lyrics and some tracks have more spaced out psychedelic elements than others. The end is more bluesy though. Why did they not mix these songs into the regular record? Still a cool record if you like intense rocking trio stuff with some psychedelic elements at time.