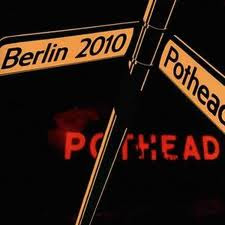 Pothead is back with their 2nd live CD (the last one came out in 2004). This one was also recorded at Huxley’s in and mixed in the bands own Big Berries Studios in . It features 20 tracks in 73 mins and only about a third of these tracks were also on the other live CD. One big surprise for me was that there are no songs from their last studio record, Rocket Boy, which I thought was a great album. I feel the sound production is quite a bit better on this one than the last. The CD opens up with Appreciate from the Pot of Gold EP. The track listing to start the CD is quite strange and diverse tracks but then they do really pick up the energy and here after the CD is really solid and the way I like Pothead.. A lot of great tracks are played like I’m a Sinner Too, Rock Child, Black War, and they end the CD, with the amazing Indian Song. I like the new intro as well. I forgot to say they also play a couple of brand new numbers including the killer Telephone Line and Let’s Rock-Rock On! You have to play this one LOUD. There is no other way to play Pothead. What a great band.
http://www.pothead.de
Posted by Scott aka. Dr. Space at 10:53 AM