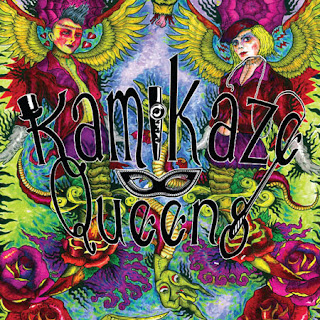 This is a fairly new band, this being their 2nd 7” release. They have released one full length CD as well. The 7” has very cool artwork. The band is from () but with an American connection. Tastee 29 starts off side A. It is a mid paced garage rock song with some fun lyrics. The female vocalist has a deep voice that really grows on you. 3 Strikes has a very catchy thread to it and a bit of a country twang as well. Sounds like a kazoo solo in this track. In some ways they remind me of Cherry Overdrive but in a totally different way than you would think. They are one the same label and it makes sense the owners would like both bands. Anyway, I quite liked both tracks. Why don’t they play cool tracks like this on the radio? This is the stuff the kids should be getting into and not that Lady Gaga shit……
http://www.heptownrecords.com http://www.myspace.com/kamikazequeens
Posted by Scott aka. Dr. Space at 10:18 AM