The Doors- every album every song by Tony Thompson 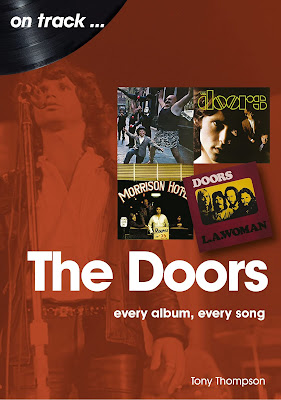 I just want to start out and say I have read quite a few of these every album every song books now and they are quite variable but this is the one that I have enjoyed the most.  The author has really brought into perspective a lot of elements of the Doors that you might have read in other books but rarely is it put into the context of the times, the album, like it is done here.  Also, I learned so much about the literary aspects and influences of a lot of the lyrics related to the songs. He does some speculation in many places where it was not obvious or know what the inspiration was.  Jim was an enormous talent that sadly got sucked into drugs and alcohol and lost most of what he had. I think Tony might overstate a bit about how great a singer Jim was. He had a good voice and sure he could sing but he was more a performance artist in many ways, before they were called that.

The author is quite critical of the producer Paul Rothchild and I had never really thought about the way he does here and I would have to totally agree with Tony on many aspects.  After listening to Waiting for the Sun in 5.1 and reading what he has written, it was for sure a huge mistake to leave Celebration of the Lizard off the record and put in a set of songs that were early takes from the previous album or demos or just not worked out well enough.

Tony did a great job also discussing the band (Rick and the Ravens) before the Doors and this is not information I had read much about in previous Doors books.  He also goes into detail on the post- Jim era records even American Prayer.

I own the Doors Perception box set and it has been great to revisit all these albums and hear them in 5.1 surround as the mix is fantastic especially on the later records when there were more channels to play with.  Tony points out just how much better a lead guitar player Robby became after 1969 and you really hear this for sure on the last few records and the live recordings from the 1970 shows that were recorded and released by Rhino.  While, these Rhino releases are not covered in detail (Except London Fog), he does mention them recommends a few. Jim´s last show was in New Orleans, LA at the Warehouse in December 1970.. July 1971, Jim was dead and that was pretty sad.. Anyway.. a very good book… One of my faves from this series of books. Great job Tony…