The Damned- Every Album Every Song (Sonicbond Publishing) 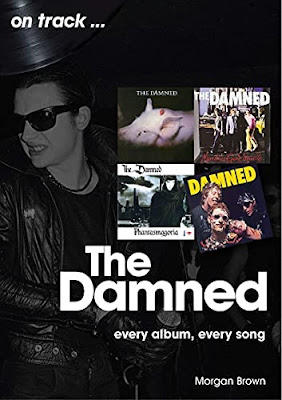 I got sent this book for review and what an interesting history these crazy guys have had. The author is very enthusiastic and makes some big claims.  As with these books, he starts with a history of the band and their place in the UK-London scene, their first single, New Rose (was it really the first punk rock single ever released??) and into the debut album. All the studio albums (11 from 1977 to 2018) are covered in great detail.  There is a fair bit of history as well as this band had some major changes since after the 2nd album they broke up and the guitar player Brian James that wrote nearly all the songs was not invited back when the rest of the guys decided to get back together after a go at being on other bands or solo projects.  Algy Ward (later TANK) was in the band briefly as well before being sacked after the US tour. Apparently, was just drunk all the time. Paul Gray (Eddie and the Hot Rods) replaced Algy and the Black Album was produced which was described by some one as the best late 60s Who album never made! It seems by 1982, the punk scene had several camps and the Damned did not really fit into any of them as they were far more experimental and broad in their musical nature. Captain Sensible had a #1 hit with his solo album and this changed the dynamic of the band and it would take them 3 years after Strawberries (1982) to make two more albums (1985 and 1986) before a long break to 1995 for the next album.

At the end of the book, he describes the various different compilations of singles, A&B sides and a whole slew of live album releases, some  unofficial or underground as well as legitimate.  At the very end, they added a few pages to describe the most recent 2021 release, the Rockfield Files and the new tracks produced. There are some pictures of the band and all the album covers including some very recent shots.

Overall, this is really well covered and I learned quite a bit about the band. If you are a fan, you will for sure enjoy this even if the author is maybe a bit too over the top about how great some of this stuff is…  For certain, they are a UK rock band that will not be forgotten.. Too many crazy characters and some damn good songs as well.   A good read for sure.