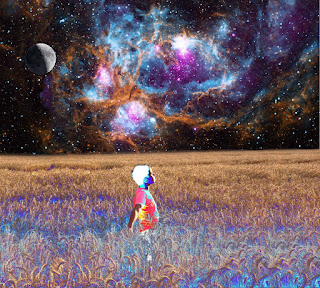 I had never heard this band before my friend Dave made a post on facebook about his band Liquid Visions played some shows with them years ago. They are a strange looking bunch of hippies from Poland.  This is their first new music in some years but they really put everything in to it as it a great collection of 8 connected songs, all written by their cosmic leader, Piotr.  The Twilight starts things off with some birdsong and then you head into part 2, The Dream (Welcome to Nucleus ) which fades up with some cymbals and acoustic guitar before the full band kicks in with organ, bass and drums and a beautiful melody. Anna comes in with a nicely sung vocal that makes you feel happy. The end of the track gets really spaced out toward the end and then the acoustic theme and organ reappears. Great track.  The TRIP is next and starts slowly with an effected guitar and slowly moving track with a spoken word by Mahasadhu Eryk Paluch.  He has a cool voice. The Mind is a more bluesy rock number that reminds me a bit of Siena Root with the female voice, organ driven hard rock and then it changes with a quite cool lead synthesizer solo and into a sort of ethnic space with some nice hand drumming and the next adventure begins. Very nice.  Beelzebufo (Lunatic Space Diary) is a short piece (does include frog sounds!) that leads into Fairy Tale and Eryk is back with his majestic voice and some acoustic guitar backing and nice keyboards.  The title track is next and one of the highlights of the album!!  It starts off like 1969 era Pink Floyd with that Richard Wright like organ but with the female voice. By 7mins it is really building with some tension and getting a bit psychedelic and some tablas kick in..  The CD ends with the Gates of Dawn, much like it started. What a great record and cool band. I had never heard of these guys and thanks for sending the the CD. I really enjoyed it a lot.