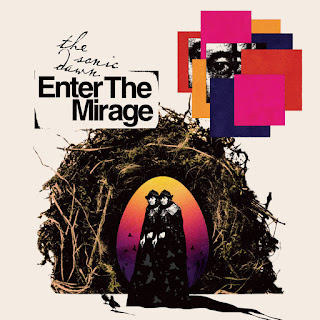 I have been following these guys since they were called the Mind Flowers. Wow.. now they have 4 records out and have toured all over Europe and really created a following for their 60s sound. The band is not into long songs and jamming at all on their records. They stay very focused with their vision with 10 new songs.  The album starts off with Young Love Old Hate and a groovy 60s flow and vibe.  Nice lyrics. The band has made a video for Hits of Acid, so check it out below.

Loose Ends is such a great track. One of the best tracks on the LP. Children of the Night is next and features the organ and acoustic guitar to change the mood and feel a lot.  Shape Shifter is quite laid back but the main guitar line is a bit heavier as it builds up.  Quite stoney and a bit psychedelic vocals here and there.  Side B starts off with Enter the Mirage reminds me of the End by the Doors to start off and features a sitar. It starts slowly but quickly speeds up and nice groove kicks in. Soul Sacrifice and Join the Dead features Erik (Siena Root) on Hammond. The former you can see the video below.

Join the Dead is about as funky as the band gets on this record. Nice sound on this track.  Sun Drifter is a bit more slick with a sort of pad keyboard that creates a strange feeling.  Love the jangly guitar line on this track. UFO is the last track and the keyboard plays a more major role in the sound and Emil sings in a very light way.

This is really excellent 60s inspired record with a nice selection of great and diverse songs. The more you listen to it the more it grabs you. Some nice positive lyrics as well. Great job guys!!