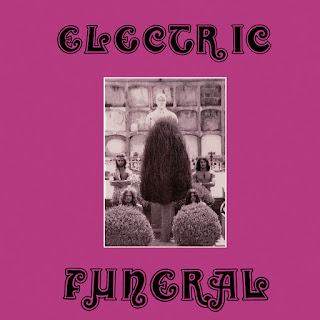 I know this came out earlier in the year but I only just received the promo CD a few weeks ago. My friend Nils had showed a picture on Facebook that he was spinning this one! Guerssen has dug up another very rare band, this time from Switzerland. Electric Funeral were a Swiss hard rock band that existed from 1970-1973 but never made any proper studio recordings.  In 1991 there was a vinyl pressing of some of this material but this is a newly expanded double LP with 4 bonus tracks. Only 3 of these are actually new as there is an alternative version of the track, You can help.

People is faded in and a short rocker where you get the first taste for the wild vocalist. War Funeral song is very inspired by Black Sabbath (only the start and maybe the guitar solo section) and also 60s rock. Black Pages (taken from another source) is a foot stomping rocker. Rock ba Rock features one of the longer guitar solos and also some wild playing at times as well. To be One is from a live concert and the singer has some intense screams to compliment the heavy rock groove, which really speeds up at 3mins to something quite fast until the drum break and then a different groove takes off. We’re gonna change the world is nearly 8 mins and another live one with a rockin energy. Fly Away has a good rocking groove, like Price Kajuku by UFO and a more falsetto vocal.  My Destiny (a track from 1973) starts off fast and furious in this 9 min rocker. The vocal is more a spoken word with a really gruff sound. Some relaly nice bass playing cuts through this track. A long guitar solo is also featured where he uses some effect pedals as well to get a more freaky sound. I Don’t Know has a funny styled vocal and reminds me of the Stooges for some reason. A sort of garage feeling with a psyched out guitar solo and later wild vocals. You Can Help is a fast rocker with a really low fi sound to start but then slows down with a thumping bass line and wild solo guitar before taking off again at the end. The album finishes off with a different version of To be One and quite frantic!

What can I say?? This is really raw lo fi recordings from the rehearsal room and live. Not terrible as you can really get the energy of this band for sure. You can check out the entire thing on you tube. I think this is only pressed in 500 copies and it comes with a download code as well.