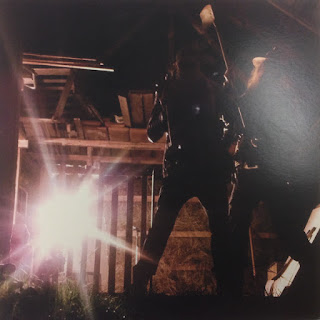 PSP is a new group by Jens (The Spacious Mind) and his partner. It was not at all what I had expected. Jens released a solo album many years ago with some really great tracks and this is what I thought but boy was I mistaken!  The album features 5 tracks and starts off with Wicked (See the video below).  Hard to describe song but it has the vocal line Wicked repeated over and over, with a steady drum beat and haunting organ. There is also a guitar line and then finally mixed into this is a very strange fuzz guitar that cuts right into your brain. Later a male vocal enters in to compliment the organ line. Reminds me a bit of Der Blutharsch And The Infinite Church Of The Leading Hand.

The 2nd track, Talkin’ to the Heather Blues (also has a video) and starts off a bit like Voodoo Chile by jimi Hendrix but with a strong political message. After 4 mins of intense psych, the track desolves into space with some nice organ and one last freakout at the end. Great track.

Woke up in a Ditch n’ This is what I Had, is an old school 40s style blues song after you had a couple of cups of mushroom tea!  Side B starts with So you want to be a Rock n Roll Star (The Byrds had a song called this but they don’t credit them anywhere on the sleeve so maybe they just took the title!).  This track is totally different and mainly an organ drone with some spacey guitar and other effects. It is very creepy at times and all instrumental. Mother in the Mud has a freaky vibe and a drum machine rhythm over which, the spacey music is layered. Almost a club mix but just too strange. What a far out and cool record.. Go discover it!
What a special record. Comes with an insert with some of the lyrics and some drawings on a thick cardboard print.  Made in 300 copies