One of Hours- When you hear the Music, It’s Yours (Out-Sider OSR074) 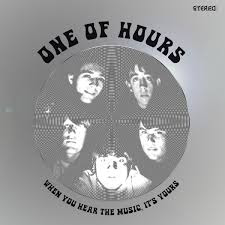 One of Hours was a 60s band from Lexington, Kentucky. They released a single 7” record in 1967.  Later in 67 and into 1968, the band worked on a full length record. The band had changed it’s name to Dandelion Wine by this time. The record was sent to Liberty but a deal never came through. Later the master tapes would be destroyed in a warehouse fire. Guerssen has managed to salvage this record from band member, Bob Willcutt, who had a first generation tape.  All 12 tracks are presented on this deluxe vinyl record.

I found this pretty tough to get into. The opening track is the longest at 5.35 and also probably the best and most interesting, with some fuzzy guitars, a mix of singing and some spoken words (like the Beatles) in the background, some samples, etc.. Mother Said is a strange one with kazoo, effected voice and a guitar line a bit like In a gadda da vida by Iron Butterfly.  Love is Real is a short strange track.  Mary Jane like a Woman features some piano and a laid back vocal but also a sort of trippy vibe with a haunting falsetto vocal at times. Cry is more a rock and roll number sung in a totally funny style and so different from the last track. Within my Garden sees the band experimenting quite a bit and is one of the strangest tracks. Little Willie has a bop bop backing vocal on a sort of 50s rock and roll take on 60s psych (the mid section). Kazoo Man (hear it below). Sweet Dragonfly has this sort of ethnic feel to it and sounds like a track I heard in a movie once! Cool organ on this track. Incense C-19x is more a rocker. A way to leave at Last closes the record with a more relaxed track with a strange vocal in the background here and there for the first part, then at just before a minute, it goes into the sea and the keys start a new theme. Nice..

The band apparently used some unusual techniques and experimented with backwards recording, etc.. but I did find the music a bit dated.  The promo sheet says place next to West Coast Pop Art Experimental band but these guys were no where near as interesting and did not have as good songs, although there are some great numbers in this collection. Check it out for yourself below.