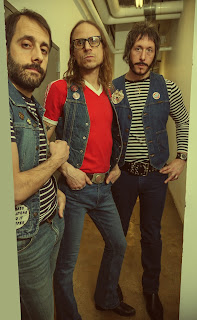 The Brooklyn NY band, the Golden Grass is back with a new EP supporting their upcoming European tour with the great German band, Wedge. The EP features 2 mew original songs and a few covers as well. 8 tracks in total.  Here is the detailed info:

The “100 Arrows” EP consists of 4 brand new studio recordings, featuring 2 original new compositions as well as smashing covers of OPEN MIND’s “Magic Potion” & BUBBLE PUPPY’s “Hot Smoke And Sasafrass”, both of which have been standards in THE GOLDEN GRASS’ live show for several years. In fact, this is the 2nd time they have recorded “Hot Smoke And Sasafrass”, as it previously appeared on their 2xLP split release with KILLER BOOGIE, BANQUET & WILD EYES in 2016 (on Heavy Psych Sounds), and they chose to re-record it because they had developed such an intense and expansive version of it over the years, it needed proper documentation! The CD release will also include 4 bonus tracks, 2 of which come from 2016 pre-production demos for their “Absolutely” LP and the other 2 from their live Daytrotter session from 2017, which includes cover versions of TIN HOUSE’s “I Want Your Body” and ICECROSS’ “Wandering Around”, both of which had also been staples in their live repertoire for years.

100 Arrows is a fast paced rocker with a heavy guitar riff. It slows down around the vocal chorus and then off we go, rocking away. This track reminds me a bit of the vibe of Adam’s other band, Rattlesnake! Fast Time Running has a great guitar riff like old ZZTOP before the vocals kicks in and then a more melodic side appears. Adam and Michael trading off and sharing the vocals on this one. Lots of changes in this track with some great riffs and always keeping it interesting.  I was not so keen on their version of Magic Potion. My fave version is by Sundial.  They really nail Hot Smoke by Bubble Puppy on this newly recorded version. Catch your Eve, was on the Absolutely LP but this version has a bit more air in the sound production but the track is pretty similar with the LP version but the slide guitar part does not cut through the way it does on the final version. A great song and vibe. Burn it all Away is an instrumental jammed out track with some intense drumming.  I want your Body is a track I had never heard them play. They have fun playing this one. Wandering Around by Icecross, they played in Copenhagen a few years back and they really rock this one out nicely, with an almost QUO like vibe.  Great EP and one that really grows on you.  I hope I can hunt down the CD.

The band is on tour in Europe with Wedge until the middle of April. Check them out. Great live band.