This concert was an adventure. We drove down to Lisboa the day before (found out too late that Steven Wilson was playing) to meet some of our friends from Denmark. We had a great craft beer bar crawl hitting, three cool places (Lizbeer, Cervetaca, and Duque Brewpub).

Anyway, there were a lot of problems with getting our free tickets but in the end we got it sorted out with a few phone calls to NY.  Jam, who came down from Denmark to interview Lars also had quite some problems and I am not even sure it happened in the end.

MEO arena is a huge place, holds around 20,000 people and the show was sold out. We had great seats in row F in balcony section 4. There were perfect views of the stage which was set about 2/3 of the way into the arena floor. It is the same stage they have been using for some time with these very cool visual cubes they can lower up and down and have different coordinated images on.

First off a band from Norway (We had seen them as Sweden Rock, maybe 5 years ago) called Kvelertak opened. The sound was just awful. You could not make out any vocals at all. No clarity at all. Muddy bass. Drums were the only thing you could hear well. The three guitar players, playing nearly the same riffs (very rarely any solos), just melted into one messy sound.  They were not very loud at all. Cool lights though. We did not enjoy it at all.  A band like this is no threat at all to Metallica. No chance of being blown off the stage. 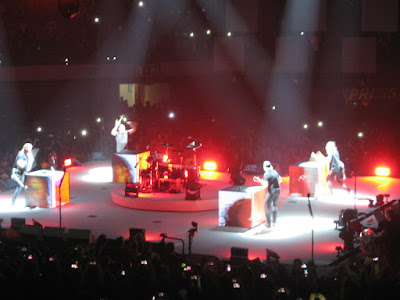 Metallica were supposed to start at 2130 but were delayed to about 2145 or so. The crowd was brimming with energy and I have to say, this being the first indoor arena show I have been to since seeing Iron Maiden and Anthrax at the Cow Palace in SF in 1992, wow.. This crowd was incredible and blew James away. He even said something about them being too loud. I agree. Metallica’s volume was too low and the audience were louder than the entire band. Sound was really bad to start as well and you could not hear Kirk at all. Within 30mins it was acceptable but barely and you could still not really hear kirk’s solos clearly. Sounded like he played in another cavern. This shit sound and overly loud audience pretty much ruined the show. The only saving grace was the very cool light show. The set was a lot of new stuff (that the audience still knew all the choruses and many times all the words as well. I was disappointed in the set. Besides when they Kirk and Rob came out and did a small tribute to a famous Portuguese band (Xutos e Pontapés- see video below), where one of the main guys had died a few months ago, the set was pretty predictable and they do not have to do predictable sets. The audience knows every song from every album. At the end of Sanitarium, they lowered these huge boxes down onto the stage. I thought they were going to have images on them but at the end of Now that were Dead, they kicked into a huge drum solo with all the guys beating on these boxes. It was not really that rhythmic or cool but fun. I was great to hear Harvester of Sorrow. The band was in a good mood, played very well. Highlight for me was probably most of Am I Evil into Creeping Death.. The Moth to Flame was a cool song and they had these small drones that came out of the stage, flew around and went back into the stage in another place. It looked really cool. It was fun but I would never go see a show in this place again. Sound is awful. A guy next to us who had his 7 year old son with him said it is always bad in this arena. For me, the sound is so important and it was just not enjoyable. Too low and no clarity. Bummer.

The Ecstasy of Gold intro, Hardwired, Atlas, Rise, Seek & Destroy, Harvester of Sorrow, Welcome Home (Sanitarium), Now That We're Dead (with drum solo), Dream No More, For Whom the Bell Tolls, Halo on Fire, A minha casinha – (Xutos e Pontapés cover), Am I Evil?, Creeping Death, Moth Into Flame, Sad but True, One, Master of Puppets
Encore: Spit Out the Bone, Nothing Else Matters, Enter Sandman 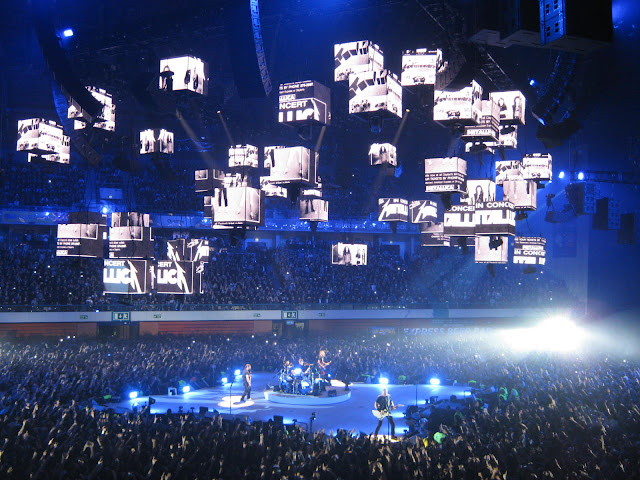