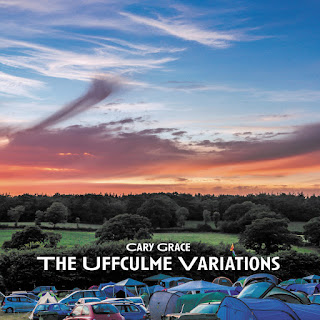 Cary is back with a mostly instrumental live concert CD-r recorded at the Kozfest 2016, where she performed under the name the Cary Grace band with special guests Steffi Sharpstrings and Graham Clark (both played with GONG and were on Cary’s previous album). No one is credited on the album except Cary, Steffi and Graham but I guess the band is also featuring these folks who played in Cary’s band in 2016: Andy Budge on bass, David Payne on Drums, Victoria Reyes on keyboards, backing vocals, and oboe? This live album features 6 track, three from some of her albums and three new improvised tracks and last a little under an hour. The whole thing starts off with Orange Sky (from Tygerland).  Haunting keyboards, drums, bass, Cary’s powerful voice (with some nice delays) and layers of guitar and violin (Graham).  A slow spacey track. Trouble is a much more upbeat rock number featuring Graham and later some ripping guitar from Steffi around the 4mins mark. A lot of really nice jamming in this track including an organ/keyboard solo later on. Kozmik Eye is a 15min jammed out track starting with some nice glissando guitar and violin while the drums and bass keep the groove going. Some spacey keys are also hiding in the back. Next Steffi takes the first long solo. The vocals kick in after 5mins and then back to more improvising and a bit of reggae like grooves, spacey synths, ripping guitars.. Cool stuff. The title track is 7mins and again features some really nice guitar and violin exchanges. The bass playing really shines through as well. I feel like Cary is often too low in the mix with her synths on many of the tracks. (You know she makes synth modules, cool!).  A very nice and melodic track. You can really hear the audience is digging it at the end of this one. Cassiopeia 2016, is a new take on an old song of Cary’s.  A long 11min jam with Steffi and Graham taking center stage at least to start. The Grand theme of things ends this very cool show, with a slow moody track with a heavier guitar from the great Kozfest in England. I would love to go to this one someday…. Anyway, another cool release.. Check it out.