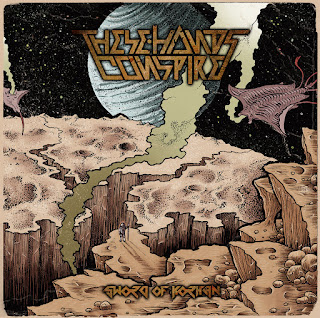 Another band who gave me their CD at Roadburn for review. This is a super cool digipack CD with great artwork and a cool booklet with the entire story that is told by the record on a thick paper print. No information about who is in the band or how many or who sings, etc.. The band is based in Berlin and plays heavy metal with a spacey feeling at times. The CD opens with an instrumental intro that leads into Praise to the Nova Rider. A true classic metal riff ala The Sword style kicks off the track. This is a long track with a lot of singing and some nice melodic parts but not that many guitar solos. The singer has a good voice but it does not stand out. The Beast Cometh starts straight out of the previous track and has a slow build before the heavy riffing kicks in with the groove around 1min. IT slows down around 4mins and becomes a bit doomy and then picks up again around 5mins. The inner core of the Middle Sun continues the journey and story. To get the most out of this record you need to read the lyrics along as it tells a cool story. The Battle of Sur speeds things up a lot. Ambush at Antarox IV is a mid-paced track and features one of the few guitar solos on this mostly metal riffing record. Son of Korhan is the last track on the CD before an outro piece. Musically, the record has not really excited me much but I love the concept, the story, the art. If they were to perform this live they would need some killer film of the story to go along.