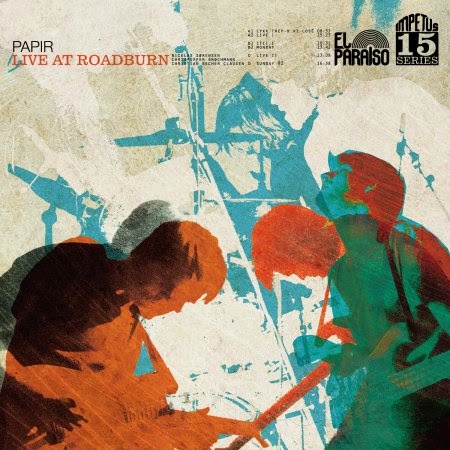 The instrumental Danish three piece are back with a new single CD or double LP from their live concerts at the amazing Roadburn festival 2014. There is also a limited edition version with an extra 10” with two more tracks but this is sold out now unless you contact the band directly. I have been following the band since the very early days and was even at the band’s first LP (the yellow one) release party and have seen them play in a lot of interesting places. It is great to see them rise to the top of the underground psych scene and playing Roadburn and Freak Valley Festival, etc.. Each album side features one song except for side B, which has two, each over 10mins. While you will recognize the main musical themes from each of the songs, the band really improvise and take each track to new heights and different directions each night they play them. True musicians who search for something new and magical in the music and often find it! Amazing version of the song Monday. In addition to the tracks you will recognize, if you own the records, there are two new improvisations/ tracks, simply called Live 1 and Live 2. The band was really psyched and on fire at these two concerts and the energy is well captured on the recording and the mix by Jonas Munk of Causa Sui. This is a great live record and I think you will dig it for sure if you are a fan of instrumental music with a lot of killer, guitar, bass and intense drumming. A great glimpse of a band still taking their music one step forward..  I should mention that the 10" is two new studio tracks, one 7 and the other 11 mins and not taken from the live concerts.

http://papirband.com http://www.elparaisorecords.com
Posted by Scott aka. Dr. Space at 1:35 AM