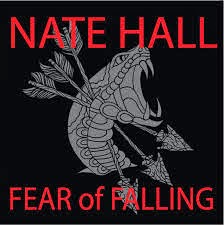 Nate Hall is the guitar player from the band, US Christmas but he is probably more well known for his solo work with Scott Kelly and others. I really dug his solo LP from a few years ago and in the last year or so he has released two cassette tapes. One of them was really far out called Electric Vacuum Roar. Fear of Falling has also been released on CD on the Heart and Crossbone Label. Anyway, this tape features 5 songs and is very much in the vein of the music he makes with US Christmas. Unlike his other tape, this is recorded with a full four piece band (guitar, bass, drums and percussion). Heat and Sway displays that melodic spacey semi-tortured guitar that is so present in US Christmas in this first track. Really Cool psychedelic stuff with two different lead guitars in the left and right channels at some point. There is some singing but that is not the focus on this track.  77 is another emotional track with a slow stoned groove and vocal with the occasional guitar solo punched in the gaps. The Traveling Sun is stripped down to just Nate’s voice and guitar and is quite an emotional story.,  Flip the tape over for the track, Fall. This one the guitar riff reminds me of a really stoned CCR song. There is a very intense guitar solo on this track.  Fear of Falling is the last track continues the slow stoney, emotional psych rock with a focus on the heavy distorted guitar and powerful vocals.  If you like Nate’s other work and US Christmas, you will dig these new tracks for sure. Powerful…..

http://natehall.bandcamp.com
Posted by Scott aka. Dr. Space at 10:56 AM