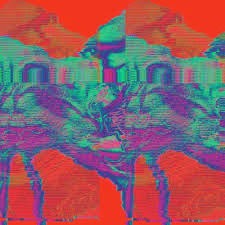 This is the first new release by German psychedelic Kraut masters after their 20 year double album last year. There are 8 tracks in about 70mins on this CD and each track has a funny name related to Black Sabbath songs. The opening track is called Paraboiled and is a strange track with a constant flow of ideas and sounds. Slowblnd speads the pace up a bit but each instruments slowly enters into the fold as the drummer keeps the drive going. The main synth drone is accompanied by some acoustic guitar and hand drums as well. Cool groovy track and one of the shorter ones at only 6mins! Symptom of the Moony Nurse starts with a cool guitar to grab your attention and is slow, stoned and spooky to start with a cool synthesizer. Suite Beef is a long slow building track with the organ taking the main lead but a pretty cool strange string instrument (phonofiddle) and mandolin making some cool accompaniment. Spacey stuff… A Tuna Sunrise has this interesting instrument called a Phillicorda played by Dirk that gives the track a really special feeling as the music is really floating and drifiting away into the outer reaches of your mind and universe. Lovely use of the Rhodes sound and organ on this track. Behind the Wall of Sheep changes the mood and starts off quite mysterious and almost like something dangerous is going to happen. The drums and bass eventually kick in as the guitar line with a slow wah creates some tension and the synths pulse and push as the track searches for one instrument to take the lead and punch out into the known… It becomes nearly a space rock track but then slowly glides back out into space and then back for another short flight or glide…  Seven and Smell features some spoken words stuff at the beginning as it has some tribal drumming that the bands flows a long with. Worn Utopia is another long 15min track featuring mellotron and phillocordia again… This Cd is more spaced out and drifting, than the last one but still very experimental and in the vibe of the original krautrock masters..