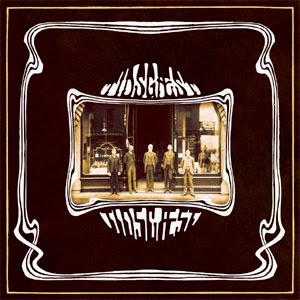 Tidsgæst (Time’s Guest) are a new Danish band playing experimental psychedelic rock music with many influences. Most of the songs are instrumental but some like I det Hinsides have long sets of lyrics all sung in Danish. The opening sequence of Portal into Onironaut reminds me a bit of Aron, that sort of spooky low fi but also beautiful melodic music. I det Hinsides is a strange psychedelic track with a ska riff at times and pretty far out at other times. Dødsridt keeps the theme dark and features some nice dual layers of lead guitar while the drummer and bass player keep the rhythm uptempo. It is really tripped out with a like theremin otherworldy stuff happening. Cool…Ondt Blod ends the side A. Side B starts with the title track, which has a lot of lyrics and reminds me a bit of SEID (one of the tracks they did for the Lord of the Rings movies). Khronopompos starts as a trippy soundscape with some metallic sounds and effects and later piano. It slowly grows over the 5mins and leads into the very short Søndagsmesse. Hver Søndag is another longer track with a lot of lyrics but all delivered in a slow spoken word phrasing with a simple drone organ and other keyboard line. At the end a dark demon presence enters the track. Be scared! Far out stuff… Now for side C. Uopklaret Sag nr. 2431-b which is a pretty long trip, around 10mins and features a long police report from 1933 being read! The band creates a dark mood also in this one with two interweaving guitar, bass and drums. Forkert Messe follows and is instrumental and is like music that might accompany a 1920’s or 1930 silent film. Pretty cool with a spacey organ starting the track Den Forkerte Dor. It develops into a very cool song. I love the guitar hook and lead guitar line. The vocal has a funny effect on it.. Side D starts off with Den Blaa jomfru and this reminds me of Aron’s solo material (he was a sort of advisor on the record!). Slow, plodding and mysterious. The last two tracks are both instrumental (Gravmaernens Val and Evighedsglimt) and the first has an excellent jazzy guitar solo and the last a long organ solo. These are some fantastic tracks. That is the end. This is not music for everyone, you need to be in the right mood and be ready to open up your mind, then you can enjoy this quite a lot. Understanding Danish would also help a lot. There is almost no information on the record about where it was record, when, who plays on it, etc.. so this must remain a mystery for now.. This record is a double vinyl in a nice single sleeve and made in only 250 copies. Check the link below.