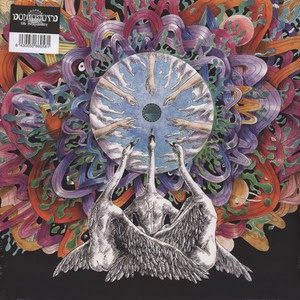 This is a new psychedelic Finnish band. This album was recorded live in the studio in July 2012. This album is a true psychedelic trip so be ready when you put side A. The album is split up into 6 parts, with four of them on side A and 2 on side B. Introduction starts things off and is a really psychedelic intro before entering into Incarnation! The incarnation starts with a very heavy low end bass. The sound is a mix of low fi fuzzed out guitar, tripped out vocals but quite high definition on the bass, which really pushes through the sound in a very cool way. Very cool lyrics as well.. After the short vocal section it is all about a psychedelic freakout with the guitars and then a major change occurs as it slows down before building back up with multiple changes in the guitar riffs and sound but always totally out in psychedelic space. Often the drums just disappear completely in the haze of sound. of cool guitar solos and effects. Very inventive. Lots Very trippy stuff. The track Lamia ends side A and starts with a slow building guitar solo that slowly morphs into the monster doom riff and the vocals come back in a very angry way (but they are mixed quite low so it is hard to understand what he is saying but you can read them in the LP).  Intense. Sit back, smoke some more and then take on side B. It starts with the instrumental track, Eifluvial Condenser. Slow and spacey delay guitars build up the track and over and over he says electric fuse.. and then the psychedelic guitars take over completely as the track builds over a repeated slow doomy bass and drum groove. Argenteum Astrum is the last track that builds out of a really spaced out section with lot of sounds and drones and effects and then the guitars come as it all slowly grows, crawls along the mossy forest floor, oozing it’s way into your mind, until the silence is broken with the return of the huge riff and bass once again taking the psychedelic experience to a higher level. I was really impressed with this record. Wow… and the album sleeve artwork is some of the coolest this year. Great job guys, now come down to Denmark and space us out!

http://www.svartrecords.com
Posted by Scott aka. Dr. Space at 11:41 PM