White Hills- So you are, so you’ll be (Thrill Jockey) 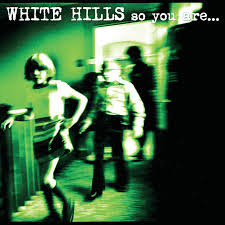 The amazing space rock band, White Hills are back with a new studio album. I will just say that I really love the trip the band has prepared for you. Each side is split into a suite of songs called Phase One and Phase Two. the individual pieces have names but don’t worry about them now. Side A starts with a strange electronic manipulated word sequence that is also repeated at the end of the side before opening with a hard hitting space rock song, that had a totally killer tranced out section. This is followed by a very cool long synth space out before another heavy dose of space-kraut-psychedelic rock with a killer long guitar solo by Dave. Flip the record over and a lot of totally spaced out sounds start and the rock track is slowly faded in and space sounds slowly faded down. here we go boys and girls! The rocket is going to take off and it does.. Dave plays an awesome guitar solo on this track. When this intense track draws to a close, a more spaced out ambient track starts to grow with just some spaced out guitars and synths to start but then another heavy space attack begins to grow. The next phase is really spaced out with a cool drone that grows and grows and hypnotizes you until the band comes back in and spaces until the end.. Amazing record.

I also got the special addition which came with an extra 12” with three tracks in a plain sleeve with a black and white A3 printed paper that you can wrap around the sleeve. They call it Timeless Tracks for Aural Pleasures featuring the classic sing-a-longs: False Revolution toward a slick Mirror, Chariot Zombie and Under Water. The first side is one long track with just mind blowing guitar stuff and loads of synths sounds bubbling up here and there and spread over the soundscape. The sound production is different suggesting it was recorded somewhere else. The sound is still very heavy space distortion. Flip the record over and you have a really special freaky synth drone piece with some really cool drumming. The last track is dreamy, repetitive, and spaced out. Also some pretty cool stuff.

http://www.thrilljockey.com http://www.whitehillsmusic.com
Posted by Scott aka. Dr. Space at 10:51 AM