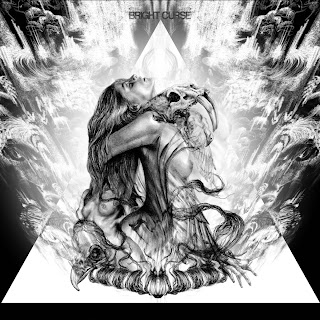 Bright Curse is the new band formed from the ashes of the cool French band, Soul Manifest. I highly recommend you check out their record if you have not heard it. Anyway, this is a new band and a new sound but lead by the guitar player and vocalist Romain from Soul Manifest. The opening track is a long instrumental song called Sonic Wave and is a pretty slow song in stoner doom vein with a nice guitar section in the middle. The Hermit is a really short track with strange lyrics. Unknown Mistress has a heavy groove and tells a really cool story in the lyrics. It is mainly driven by the heavy bass by Sammy Deveille (he has recently been replaced by JB). IT has a long slow section towards the end, where I felt more could be going on besides a few guitar sounds before the vocal returns and the track picks up but no guitar solo or jam or freakout.. Flip it over for What’s beyond the Sun. This is a more moody track with some long delays on some of the vocal sections that give it a more spacey, psychedelic track. The end section really kicks in with a heavy doom riff section before just sort of dying out. The LP ends with a more melodic slow starting track called Mind traveller. When the main guitar riff kicks in there is also a spacey effect that joins it at times. Half way through the pace really picks up with a short guitar solo and a spoken word section before it comes to an end. I have to say the record was not at all what I expected.. It grows on you, this one..

http://www.kozmik-artifactz.com
Posted by Scott aka. Dr. Space at 10:24 AM