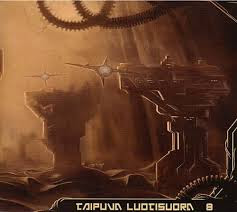 The Turku, Finland based band, TP, are back with their 5th record, which they call 8. This is perhaps related to the album having 8 tracks. Ville, the guitar player has been letting me have a sneak preview of some of this material over the last half year so I was really looking forward to hear the entire record they had made. This is the first of their releases to also be released on vinyl! Voluantum Machina starts things off with a take on the Led Zeppelin Immigrant Song guitar riff but with some cool space sounds and a matching keyboard riff which makes it sounds really cool. There are a lot of layers of things happening in this soundscape as the mid paced track really blasts you out into space. I love the lead guitar on this track as well. There has not been a lot of that on some of the bands tracks in the past, much more based on the riffs. All the beautiful melodic parts are mixed into a more heavy track plus the killer lead synthesizers by Esko! Fucking amazing start number. Kajanni starts off with what I would almost say is a signature sound for this band. It then takes a turn for a bit heavier guitar riff into the killer organ section into the lead guitar with spaced out sound section before coming back to the main melody again. Wow.. Adversarius starts off with probably the most heavy metal like guitar riff the band has ever had on one of their records. The synthesizers are really amazing and far out on this track. Volucris Orbita starts with some cool spacey synths and develops into one of the fastest track on the record and has a very deep bass that shakes the floor when it kicks in (I have a subwoofer!). I love the melody on this one. Eventa starts side B and is composed by the drummer, Taneli. This track has a lot of complicated changes and also features some acoustic guitars. Quite different. Infinium has a strange murky beginning with some cool backward parts and a repetitive keyboard line that drives the track at the beginning before the musical picture becomes clear. This is a very multi-layered track where the first solo is by the keys before the heavier guitars kick in. Later a familiar TL theme of the way the guitar and organ work together returns before the short guitar solo section and then they return to the main theme. Muovia tehdään öljkstä (no idea what this means) brings the more heavy guitar to the forefront again and a more spacey organ is accompanying it and then some really tripped out synths in the middle of the track where it gets really psychedelic. Super cool song. Evomere ends this amazing record and is a very beautiful track with violin by Tero Pajunen. This is for sure one of my favourite records for 2013. If you like adventurous instrumental music you have to hear this record. Amazing..