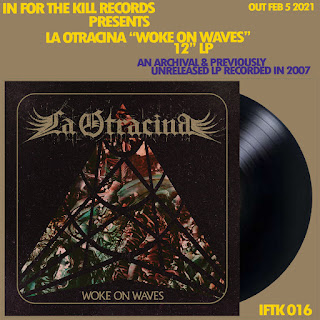 La Otracina was a really cool NY bands band. They formed way back in 2003 by Adam Kriney (Golden Grass) and released a lot of music and did some tours (saw them at Roadburn!) but the last release was 2012. This is an archive release and made in 30 vinyls and 100 CDs.  Here is what the band wrote about the record: “LA OTRACINA recorded two albums worth of instrumental music at those 2007 "Blood Moon Rider" sessions, one of which was the songs/compositions for the "Blood Moon Riders" album, and the other was 45 minutes of absolutely heady and masterfully crafted psychedelic exloratory improvisations, from the time-period when the group was at their freak-rock/free-improvisational peak! And after 14 years, these mind-blowing jams are now to be revealed to the universe for the first time ever as "Woke On Waves”.

I just have to say I am glad that I own this and while I only have a few of the bands albums, this one is really special and more spaced out some how at least on the ling album side A.  The band has a great energy as well. Damn cool archive release.