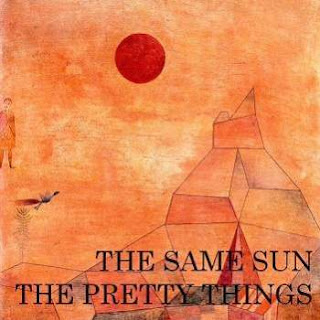 The Same Sun was on the bands latest studio album (The Sweet Pretty Things are in bed now, of course), which I really liked a lot.  The people of the FdM label felt this needed to be a proper single and have not released it.  The A side is studio tracks and the B side unreleased live tracks (They think it is Hyde Park 1969, a show my wife was at!!).  I agree the Same Sun is a fantastic track.  See a recent live version below. Renaissance Fair is a very short 1:54 but a nice version of this track.

While the live tracks are not totally new or unreleased as they appeared in the Bouquets from a Cloudy Sky box set.  She says Good Morning (from SF Sorrow) is a good rocker. Sound quality is a bit rough but you can hear all the instruments and the happiness of the band. Great rocked out solo as well.  They packed a lot into this under 4min track.  Alexander is the 2nd track and another uptempo rocker. What a killer band back in the day. They still rock today but not quite like this.  Great single!

http://www.fruitsdermerrecords.com
Posted by Scott aka. Dr. Space at 12:55 AM