Tee Pee is a New York based record label.  I have been a friend with Kenny (one of the owners) for some years. He leads the band Mirror Queen. Anyway, the label was kind enough to send me a stack of the latest releases on the label so I will go through and make some reviews. Enjoy. Joy , a San Diego based band, really kicked ass when I saw them in Norway 2 years ago.  The band is primarily the vehicle of multiinstrumentalist Zachary Oakley, who on tracks 1, 6 and 10 plays all the instruments. I had not heard any of their albums but damn this is some great rocking and stuff with some burning lead guitar, just like I like it. They have a couple of different guys playing drums (Mario Rubalcaba, Thomas Debenedetto). Brendan Dellar (trk 3, 7) and Parker Griggs (Radio Moscow- trk 8) kick in with some extra guitars on a few tracks as well.  The album is all originals except for Certified Blues (ZZTOP). Cool stuff if you like hard rocking blues stuff with a lot of attitude and guitars! 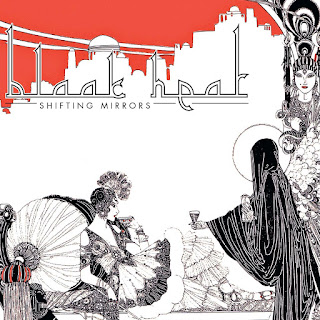 Blaak Heat is a very cool band originally from Paris. This is the bands 3rd album since 2008. I have been lucky to see them twice here in Portugal (Reverence Festival and Sonic Blast).  The core of the band is a three piece (Thomas, Henry, Mike) but 6 additional guests on the record join them. I have never heard any of their records but man this is a killer record if you dig mostly instrumental rock-metal with a bit of mid-eastern inspiration and vibe at times. Some great guitar solos and I love the addition of all sorts of cool instruments like Oud, kanun, Darbuka, and violin. Sword of Hakim is very 70s Scorpions inspired (think Steamrock Fever!). You can check out the video below. The Approach to Al-Mu`tasim is mid east inspired but has some really heavy guitars and quite complex arrangements and tells an interesting story. Taqsim brings things down with a short violin piece which leads into Ballad of Zeta Brown, a track with a great bass line and hard driving groove and guitars. Killer instrumental track. I could describe them all but this is just a great record with one amazing track after another. 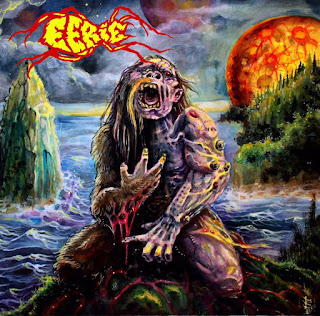 Eerie are a new SF bay area/east Coast four piece project featuring a heavy bunch of players including guitarist Tim Lehi (Draugar, Twilight), bassist Dave Sweetapple (Witch), drummer Moses Saarni (Futur Skullz) and vocalist Shane Baker (Pins of Light, Alaric). This is the bands debut and features 5 long tracks of heavy music. The production is very light and open and not so dark and bassy, which gives it a more psychedelic feeling to what could have been a very heavy record. Lots of metallic guitars, aggressive riffs, powerful vocals and long songs.  I could not find a web site or a video link to any of their music, sorry. The CD has some really cool artwork, especially inside the booklet! Enjoy. 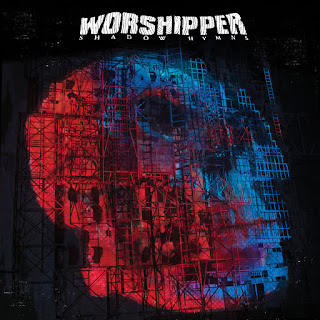 Worshipper is a new Boston based band playing what I would call classic heavy metal, inspired equally by the great bands of the 70s and 80s. High Above the Clouds starts things off with a slow moody metal piece with some great vocals (both lead and backing). Half way into the track they add some keyboards and spacey sounds to the mix. Very melodic solos to mix with the keyboards (no one is credited on the CD). Step Behind speeds things up with a heavier riff but also keeps it melodic. Ghosts and Breath is really classic NWOBHM stuff with some nice dual guitars.  Darkness (See the video below) is powerful track and also features some nice guitar playing. Reminds me a bit of Savatage. Plae beyond the light is a more commercial 80s metal rocker. Another Yesterday slows things down a bit and sounds like the first track. Wolf Song starts off with the dual guitars and reminds me a bit of the Scorpions. Black Corridor features a super cool guitar solo and finishes off this debut. Classic 80s metal style. 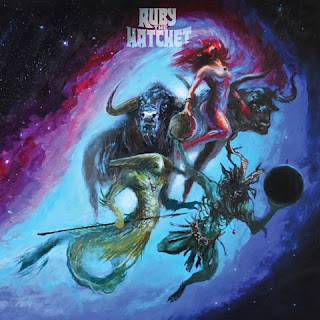 I have seen a lot written about his band but never heard them before.  The band is based in New Jersey and Pennsylvania. The band is a five piece with a female lead singer (great voice!). This is the bands 3rd album since 2012. The album was recorded live in the studio in Philadelphia. The title track starts things off with a keyboard sequence that slowly builds up before the guitars kick in. The vocals start around 2 ½ mins and have this sort of dreamy distant sound but fit in well with the sort of medieval theme! Killer is next and has a nice headbanging groove to it. A nice compliment of guitars and organ on this one.  Pagan Ritual features a cool phased out guitar and nice organ playing on a track that has a cool build and maintains this aura of mystery. Great song. The Fool starts slowly with everyone noodling about over the bass line before the main riff kicks in. This is a quite moody track with a nice melodic guitar line and softly sung vocals.  Symphony of the Night is one of the highlights of the record with its dreamy nature and slow heavy build. Great track. Gemini licks in with a more rock and roll track, which is a nice change. Lightning comes Again closes the album with a beautiful number.  Cool band. 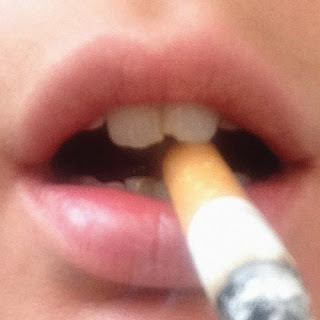 This is a band/project featuring members of Cobra Verde, Dinosaur Jr and Witch.  This is the group’s third record. Mark Lanegan is also found on a track or two.  This record is a real mix of pop, commercial rock, grunge, and hard rock. I have not quite heard a record like this one that twisted my head around and gave me really mixed feelings or whether this was really cool or crap??? I am still not 100% sure I get this record but maybe you will?? Check them out… This is the 2nd album by Toronto based Biblical and it features 8 tracks.  The four piece of primarily bass, drums, and two guitars, also throw in some analog synths here and there.  Mature Themes opens things up with an aggressive track with some almost screamed vocals. The sound production has this big loud open drum sound that gives it a special feel. The analog synths fade out of the first track and into The last thing I Remember. It has a long instrumental intro before the vocals kick in. A lot of effects on the vocals on this track making it quite trippy. Regicide is a beautiful and moody piece of music. Very cool. Fugue State features one Christine Boogie on pedal Steel and again has this sort of dreamy Pink Floyd like quality to it and some nice synth playing. The band is clearly a fan of Astra as well.  Gallows Humor brings back a harder edge sound and some more aggressive singing, while the music is still very melodic. Spiral Staircase is an instrumental track that starts with some piano before the drums kick in (loud!) and bit of a post-rock like feel to this track. The title track starts off with a guitar solo and a laid back vocal mixed a bit back in the mix. Some trippy delays in this track as well and a lot of reverb on the drum kit. House of Knives closes the CD with a good rocking number and kicks us a bit out of the dream state!  A solid record showing a lot of diversity. 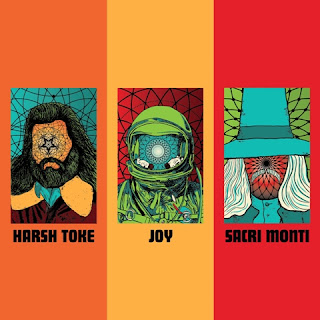 This was released in a CD format but also as a triple 7” release. All the tracks on here are unique to this release. Each band also performs a unique cover song. Harsh Toke kick things off with two Roky Erickson tracks staring off with Burn the Flames (hear below). I have never heard the original (from 1986) but this is a pretty relaxed and normal track, nothing too freaky or cool actually, not even any ripping guitar solos. Bermuda is a more energetic track (also from 1986) with some nice guitar soloing. Not the best from Harsh Toke.
Joy kicks in with Your time ain’t Long reminds me a lot of Blue Cheer, the bass, sound production and just overall rawness and energy of the track. Killer track.  Earth is a cover by the band ROAD.  Great riff and killer lead guitar on this track. Sacri Monti kicks off with an original called Over the Hill and features some cool organ to compliment the intense guitar playing. Sleeping for Years (Atomic Rooster) closes this release. All these bands are closely related sharing different members and they will all play at Roadburn 2018… 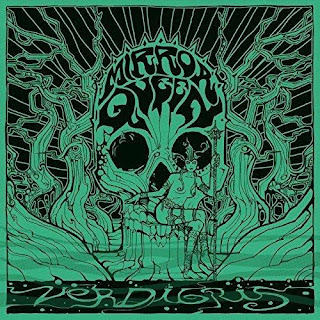 It has been awhile since the last Mirror Queen record. This one features 7 tracks and kicks off with Poignard. This is real classic heavy metal, raise your sword and die for the king music!!  Great guitar solos. It reminds my wife of Pentagram. Flying Eyes has a real classic 1974 Blue Oyster Cult feel to it and some really nice playing and interaction between the band, as they stretch this one out. Sorrows End/Dark Kiss of the Sun is another long track. A very dark theme to this one, a real classic doom metal feel like old Candlemass! Starliner (see video below) is a cool song and it even features a strong nod to Don’t fear the Reaper by BOC at the 3min point followed by a great and long guitar solo.

Verdigris, starts slowly with some dual harmony guitars as it slowly builds up and Kenny kicks in with the vocals. The album ends with a more uptempo rock and roll number called Curse the Night.   I have to say, this is the bands best work to date and an album I have really dug a lot.. Enjoy..